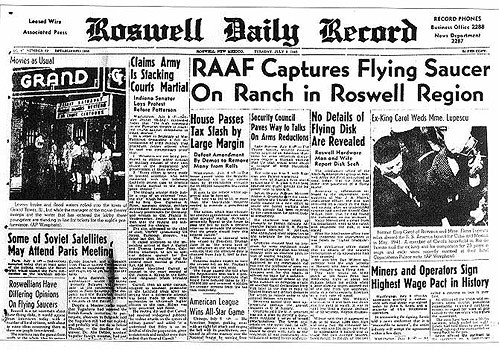 Last week UFO researcher and author Kevin Randle posted news of a $10,000 reward for anyone who can decipher the text of a memo seen in a picture of what is supposedly debris from the Roswell UFO crash site. Some UFO researchers doubt the debris in the photo is actually from the object that crashed outside Roswell in July, 1947, and believe the text in the memo proves it.

The photograph in question shows General Roger Ramey in his office at Fort Worth Army Air Field, later known as Carswell Air Force Base. He is holding a memo and crouching over debris he claims was from the Roswell crash site, and that he was able to identify as a weather balloon. 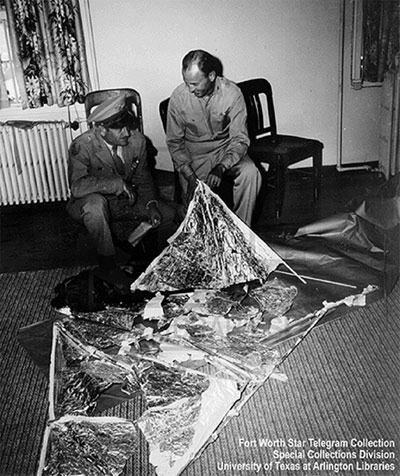 General Roger Ramey (left) with Colonel Thomas Dubois looking at the weather balloon Ramey claimed was mistaken for a flying saucer in Roswell in 1947. Ramey is holding the memo in question.

Only hours prior to the photos being taken, the public information officer at Roswell Army Air Field, at the behest of his superior officer, Colonel William Blanchard, sent out a press release claiming that they had discovered debris from a crashed flying saucer. Jesse Marcel, the intelligence officer who was dispatched to inspect and collect the material a day earlier, was ordered to fly himself and the material to Fort Worth.

Memo in Ramey’s hand from above photo enlarged.

Upon arriving in Fort Worth, he was escorted to Ramey’s office where a photographer and Ramey’s chief of staff, Colonel Thomas Dubious, were waiting. On the floor was material that Marcel later said was obviously from a weather balloon. However, according to Marcel, this was not the material he had collected in New Mexico. 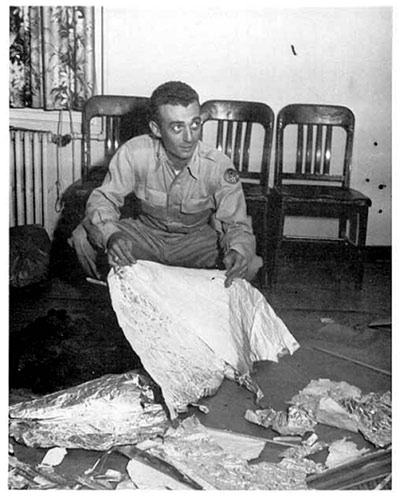 The three men then had pictures taken with the weather balloon debris. The pictures were then used in articles claiming that a mistake had been made, and the flying saucer had actually turned out to be a weather balloon. Marcel says he was ordered to go along with the story, and like a good soldier, he did what he was told, no questions asked.

Incidentally, Dubois also later claimed the debris in these photos were part of a cover-up. He said the weather balloon material was set out to trick the public. You can see his interview in the video below.

The weather balloon explanation was accepted by the press and the public. It was not until the 1980s, when witnesses like Marcel came forward that the incident began to catch the public’s attention. Now, as in the video below, most people have heard of the alleged Roswell UFO crash.

Due to growing public interest, and an inquiry into the matter by New Mexico Congressman Steven Schiff, the Air Force later admitted that the weather balloon explanation was a cover-up in an exhaustive report debunking the idea that the debris was actually from an extraterrestrial spacecraft. Their conclusion was that it was from a top secret project called Project Mogul. Mogul’s purpose was to send balloons aloft with sensitive listening devices that could detect Russian nuclear tests. They suspected Ramey switched out the debris to maintain the secrecy for Project Mogul.

However, some Roswell UFO researchers believe that Ramey’s photo is the US Air Force’s Achilles heel in the Roswell cover-up. In the photos of Ramey in his office, a memo can clearly be seen in his hands. Using modern technology to zoom in and enhance the image, in one of the pictures in particular, researchers believe some of the words can be made out. David Rudiak, in particular, has focused on deciphering the text, and he feels he has determined what 80% of the letters are. He says it is clear that there is a reference to a disc, and believes he can also make out a portion of a sentence that reads: “and the victims of the wreck.”

Rudiak says this proves that a disc-shaped craft was recovered. However, perhaps more startling, he says it also corroborates the claims that extraterrestrial bodies were recovered from that wreck.

Portion of the memo deciphered by Rudiak. (Credit: David Rudiak)

In their Roswell report, the US Air Force says they also tried to decipher the text in the memo. They claim, “the photo was sent to a national-level organization for digitizing and subsequent photo interpretation and analysis.” As for the results, they wrote, “This organization reported on July 20, 1994, that even after digitizing, the photos were of insufficient quality to visualize either of the details sought for analysis.”

Many find those claims to be hard to accept. Especially after looking at a magnified version of the memo. It seems that something should be able to be deciphered. While not all researchers agree with Rudiak’s interpretation, many UFO researchers do believe there is something there. Apparently, an anonymous donor also feels strongly that there is something important to be discovered in the memo.

Randle has spent a lot of time writing about and researching the Roswell UFO crash. He has also posted many blog articles about the research into what is now referred to as the “Ramey memo.”

In a blog titled “Ramey Memo and the $10,000 Reward” posted June 16, 2016, Randle wrote: “A trusted colleague who is not a Ufologist but does have an interested in Roswell and UFOs and who has the money, has taken this in a slightly different direction. He is offering a $10,000 reward for the first person or group/lab that can provide a definite read of the Ramey memo.”

Randle continues, “To claim the reward a number of criteria will need to be met, including full reproducibility of the result (with methodology of the individual/lab completely explained and transparent so that anyone knowledgeable can replicate in much the same way that the placard on the Not Roswell Slides was revealed). There must be overwhelming agreement that the result is definitive with most of the text clear enough that there is little or no disagreement on what it says across a broad spectrum of people of all opinions whether true believer or complete skeptic.”

Some have complained that the requirements are too difficult to meet, and that there is never “little or no disagreement” among “a broad spectrum of people.” Randle argues that in the case of a photograph released last summer of an alleged alien from Roswell, the deciphering of a placard in the image was accepted by a broad spectrum. He pointed out that only those with a vested interested in the photo being an alien disagreed.

Although, the Roswell incident took place nearly 70 years ago, this memo could demonstrate that there is more to be learned about this enduring mystery. No doubt many are still curious about it. I will find out first hand as a speaker for the Roswell Daily Record’s Roswell UFO Anniversary event on July 1 and July 2. The reward will definitely give myself and my fellow UFO enthusiasts more to talk about.

Take a look at the images and Rudiak’s work and let us know what you think. Maybe you will be the one to figure out what the memo says. 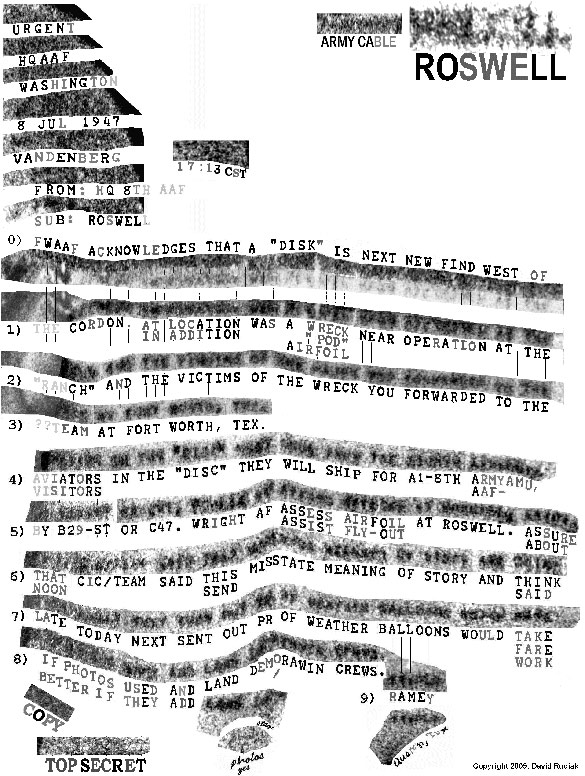