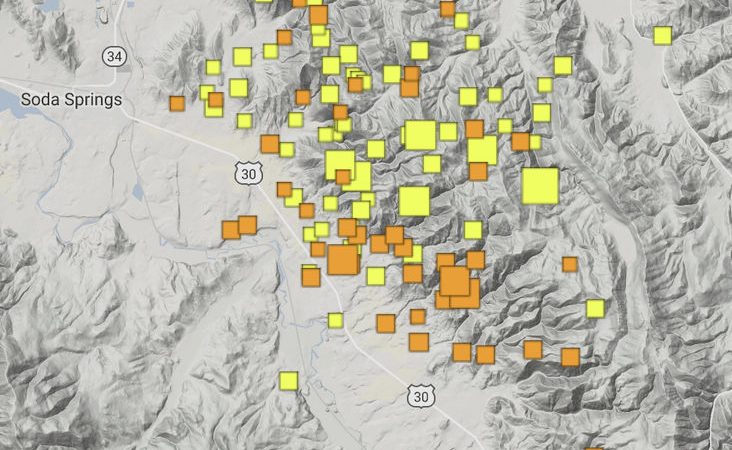 People should be prepared for the worst when it comes to the earthquake swarm that’s been shaking Southeast Idaho since Saturday evening.

But experts say chances are the worst won’t happen.

Still, the most alarming scenario is that the earthquake swarm will end with a very destructive 7.0 magnitude earthquake capable of destroying buildings and killing people.

The good news is that the experts say the chance of that happening is very low.

“While we can’t guarantee that there won’t be a larger quake in this area, the possibility is extremely low,” said Shannon Kobs Nawotniak, an Idaho State University geosciences assistant professor who studies earthquakes. “We live in a seismically active area, so everyone should always be up to date on their earthquake safety, just like they would for a fire drill. It is prudent to be prepared, even when the likelihood of the event is very low.”

There have been 141 earthquakes in Southeast Idaho since Saturday evening — all near the Caribou County city of Soda Springs. There were 25 quakes Wednesday, 20 on Tuesday, 28 on Monday, 34 throughout the day on Sunday and 34 on Saturday night. All 141 of the quakes were reported by University of Utah Seismograph Stations.

If a destructive 7.0 magnitude earthquake did occur, it could happen in the Caribou County area near the epicenters of the 141 quakes or it could happen elsewhere in the region where faults also exist.

Pearson said the chance of the 7.0 quake occurring are very low but considering the current earthquake swarm that’s shaking Southeast Idaho people should be prepared for it nonetheless.

“There is most likely not going to be a larger earthquake but there is the possibility of a larger one,” Pearson said. “I don’t want to say everything is fine here because there’s the possibility it won’t be.”

Caribou County emergency management officials said the county’s emergency responders have already been on a heightened state of alert because it is wildfire season. The earthquake swarm is presenting yet another reason for them to be ready to respond at a moment’s notice.

Caribou County emergency management officials have some degree of confidence they are prepared for a worst case scenario because they received earthquake disaster training two years ago from the Federal Emergency Management Agency.

The earthquake swarm is also causing the county’s emergency responders to contemplate how they would handle a much larger earthquake so if a 7.0 temblor occurs they’ll be better prepared, emergency management officials said.

The U.S. Geological Survey said that 7.0 magnitude quakes will cause “considerable damage” to ordinary houses and buildings including “partial collapse.” Such temblors will also cause chimneys, factory smoke stacks and walls to collapse, according to the USGA.

Earthquake swarms have been known to continue for weeks or even months. Caribou County emergency management officials said they believe the current swarm could continue for another two weeks.

If a big quake does occur, there are several Caribou County schools and churches that are designated to be shelters for anyone who’s displaced. Additional emergency resources would be called in from other Southeast Idaho counties, the state and possibly even the federal government to help Caribou County deal with casualties and the extensive damage that would be expected.

Although a 7.0 magnitude earthquake probably won’t happen, Pearson is advising Southeast Idahoans to make sure they secure all heavy objects in their houses to walls to keep them from falling. He also said it would be wise to remove anything heavy that’s above your bed so it can’t fall on you and cause injury.

But much more likely than the earthquake swarm ending with a very destructive earthquake, Pearson said, are much less catastrophic scenarios — that the most powerful quake occurred at the beginning of the swarm and it’s being followed by smaller quakes or that the swarm will end up being a series of similarly sized quakes.

Thus far the most powerful temblor in the swarm was the second quake to occur. It was a 5.3 magnitude earthquake and struck at 5:56 p.m. Saturday. Authorities say it’s been years since Southeast Idaho experienced a quake of 5.0 magnitude or greater. Such quakes can cause damage to houses and other buildings.

By comparison, a 7.0 magnitude quake would be at least 50 times bigger than Saturday evening’s 5.3 magnitude temblor.

Fortunately no damage to structures or injuries to people have been reported as a result of any of the 141 earthquakes that have struck Southeast Idaho since Saturday evening.

All of the quakes have occurred east, northeast and southeast of Soda Springs, Caribou County’s largest city with a population of about 3,000 people. The closest earthquake to Soda Springs occurred one mile east of the city, while the farthest were about 20 miles to the northeast and southeast. The 5.3 magnitude quake was about 10 miles to the east of the city.

Although a swarm of 141 quakes is very unusual for Southeast Idaho, Pearson said it’s definitely not unusual to have earthquakes near Soda Springs and along the East Idaho-Western Wyoming border because of the faults that run through that part of the region.

The big question is what’s going to happen next and Pearson said, “We don’t necessarily know.”

Pearson said he can dispel two rumors floating around. One is that the quakes were somehow caused by the test detonation of a hydrogen bomb by North Korea this past weekend. Secondly, Pearson said the earthquake swarm near Soda Springs does not mean there’s going to be a volcanic eruption at Yellowstone National Park.

“This has nothing to do with North Korea or Yellowstone,” Pearson said.

Although experts believe a 7.0 magnitude quake is a definite possibility at some point in Southeast Idaho’s future, Idaho itself has never experienced a quake that powerful. The strongest quake in state history was a 6.9 magnitude temblor that struck in 1983 between Mackay and Challis. That quake killed two children and damaged several buildings.

Caribou County authorities say county residents are handling all of the earthquakes about as well as can be expected. Authorities said there was some panic when the quakes started on Saturday evening. Since then people have calmed down, according to emergency management officials, possibly because none of the quakes have caused any injuries, damage or even power outages.

The biggest impact thus far in Caribou County is that the quakes have kept the county’s emergency dispatchers busy receiving calls from concerned citizens. But as of Monday evening the Caribou County Sheriff’s Office reported that the calls have tapered off even though the earthquakes haven’t.

The quakes have been felt as far away as Salt Lake City, Ogden and Logan in northern Utah and throughout Southeast Idaho, including Pocatello, Chubbuck, American Falls, Basalt, Malad, Aberdeen, Springfield, Fort Hall, Arimo and Blackfoot.

Pearson said if a 7.0 earthquake does strike, it will likely occur away from Southeast Idaho’s most populated areas.

Much less damage will occur in Southeast Idaho’s biggest cities, such as Pocatello, Idaho Falls, Ammon, Chubbuck and Blackfoot, because they’re much farther away from the region’s faults, Pearson said.

Pearson said that if a 7.0 magnitude earthquake did occur in Caribou County, it would be very devastating, even to the county’s economy because it could damage and/or destroy the mining facilities that are Caribou’s largest employers.

“Such a quake could have a big economic trickle down,” he said.