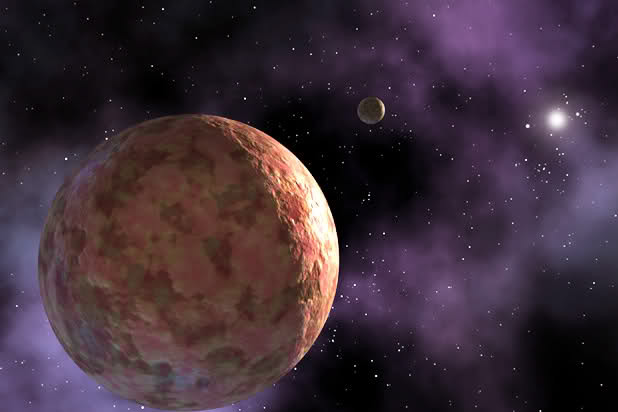 Zecharia Sitchin described Nibiru according to Sumerian cosmology as the 12th planet. Nibiru is home to an alien race called the Anunnaki an extreme advanced extraterrestrial civilization. Researchers have talked about the possibility of a giant planet that has an extreme strange orbit around our sun.

In 2008, Japanese researchers announced that according to their calculations, there should be an “undiscovered” planet at a distance of about 100 AU (astronomical units) that has a size of up to two-thirds of the planet Earth. These calculations support the hypothesis of the existence of Nibiru, or Planet X. Here we bring you 20 things you should know about the mysterious planet Nibiru.

1. The name “Nibiru” originated from the ancient Sumerians, who once inhabited ancient Mesopotamia, modern-day Iraq. It is the twelfth planet describe by Zecharia Sitchin.

2. Nibiru is also called Marduk, and it arrives to our solars system with a extreme clockwise elliptical course.

3. According to several ancient texts from Mesopotamia, there is strong evidence that supports theories that Nibiru, has an orbital period of 3600 years. The number 3,600 was represented by the Sumerians as a large circle.

4. The expression for the planet, the “shar” also means a perfect circle or full circle and also represents the number.

5. Ancient Astronaut theorists believe that the convergence of the three concepts – planet / orbit / and number 3,600 – could not be a coincidence.

6. Strangely, The periods of the kingdom were also multiples of shar, 3,600 years, leading to the speculation that the empires shares were related to the orbital period of 3600 years.

7. NASA has identified a planet with an anomalous orbit around our Sun, they refer to it as Planet X. The Washington post and other news agencies wrote about it in 1983 and the coming years.

8. According to the Washington Post: “A heavenly body possibly as large as the giant planet Jupiter and possibly so close to Earth that it would be part of this solar system has been found in the direction of the constellation Orion by an orbiting telescope aboard the U.S. infrared astronomical satellite… ‘All I can tell you is that we don’t know what it is,’ said Gerry Neugebauer, chief IRAS scientist.”

9. R. Harrington wrote a very interesting article in the Astronomical Journal in 1988. Harrington suggested that a planet three or four times the size of Earth existed, having a position of three or four-time further from the sun than Pluto. According to mathematical models that were presented, it is believed that Planet X or Nibiru, has an extreme elliptical orbit of 30 degrees.

10. It is believed that the planet originated from the Orion constellation, passing near our planet and coming towards it from the Sun, after making its way by Earth, it head towards outer space and “disappears” .

11. Mythologically speaking, it has the appearance of a fiery beast, appearing in the sky as a second sun.

12. Nibriu is a magnetic planet, causing the Earth to tilt in space as it passes.

13. Nibiru is believed to have 4 times the diameter of Earth and is 23 times more massive, a truly gigantic planet.

14. According to ancient texts, Nibiru Is wrapped in a cloud of dust iron oxide red, making the rivers and lakes acquire a reddish color.

15 .It is believed that it would cause days of obscurity while passing next to other planets, possibly even stopping their rotation during its transition across space due to its incredible magnetic properties.

16. Nibiru is also associated with great dangers. Some researchers believe if a planet like Nibiru would come close to Earth, it would cause large earthquakes, tsunamis, volcanic eruptions creating an entirely new geography and climate.

17. It is called ” The Destroyer” in the Kolbrin, a parallel bible located in the monastery of Glastonbury in Scotland; Men forget the days of the Destroyer. Only the wise know where it went and that it shall return at the appointed time. … It is the Destroyer … Its color was bright and fierce and ever-changing, with an unstable appearance … a fierce body of flames.

18. According to the US News World Report, Planet X or Nibiru exists, the article; “Shrouded from the sun’s light, mysteriously tugging at the orbits of Uranus and Neptune, is an unseen force that astronomers suspect may be Planet X – a 10th resident of the Earth’s celestial neighborhood. Last year, the infrared astronomical satellite (IRAS), circling in a polar orbit 560 miles from the Earth, detected heat from an object about 50 billion miles away that is now the subject of intense speculation.”

19. According to an article published in Newsweek on July 13, 1987, NASA disclosed that there may be a 10th planet orbiting our Sun.  According to NASA research scientist John Anderson, Planet X might actually be out there, but nowhere near our planets. The article form Newsweek states: “if he is right, two of the most intriguing puzzles of space science might be solved: what caused mysterious irregularities in the orbits of Uranus and Neptune during the 19th Century? And what killed off the dinosaurs 26 million years ago.”

20. On October 23, 1996 an article from AP called “New rebel planet found outside the solar system” states the following: A new planet that breaks all the rules about how and where planets form has been identified in orbit of a twin star about 70 light years from Earth in a constellation commonly known as the Northern Cross. The new planet has a roller coaster like orbit that swoops down close to its central star and then swings far out into frigid fringes, following a strange egg-shaped orbit that is unlike that of any other known planet.