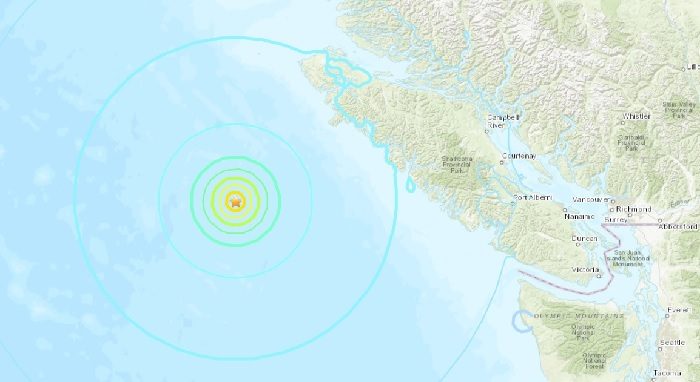 3 Earthquakes Hit Off Vancouver Island Measuring Between 6.5- and 6.8-magnitude

Three earthquakes measured at magnitudes of anywhere between 6.5 and 6.8 struck off Vancouver Island on Sunday night.

They hit about 200 kilometres west of the island, according to Natural Resources Canada (NRC).

One of the quakes, which was measured at a magnitude of 6.5, hit approximately 200 kilometres from the Vancouver Island community of Port Alice on Sunday night.

The 6.8-magnitude quake is believed to have struck just under 200 kilometres west of Port Alice.

There were no reports of damage, and “none would be expected,” according to NRC.

The quake happened at a depth of approximately 10 kilometres and no tsunami was expected.

Nor were there any reports of the quake having been felt.

Though the quake may seem large compared to other events that have hit the West Coast of North America in recent years, it was far from the biggest.

Earlier this year, a 7.9-magnitude earthquake hit just under 600 kilometres south of Anchorage, triggering a tsunami that was less than a foot high.

Historically, the largest of quakes measuring at a magnitude of five or more near B.C. happened in 1970, when an event hit a magnitude of 7.4, according to Natural Resources Canada.