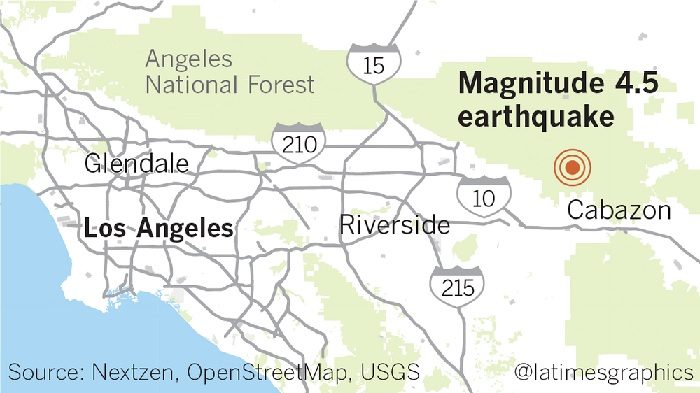 With scientist warning of an increase in large earthquakes this year due to a slow in Earths rotation and geological activity going on in Hawaii one has to take these events a little more seriously.

A magnitude 4.5 earthquake shook a large portion of Southern California on Tuesday, and was felt from San Diego to Santa Clarita, authorities said.

Tuesday’s temblor struck at 4:49 a.m. about seven miles north of Cabazon and 85 miles east of downtown Los Angeles. The epicenter was close to the San Gorgonio Pass, through which Interstate 10 connects Palm Springs with San Bernardino.

There were no immediate reports of damage. The U.S. Geological Survey’s earthquake early warning system under development worked as expected, giving scientists in Pasadena – about 80 miles away from the epicenter – 26 seconds of warning before the shaking arrived, according to a Southern California Seismic Network report.

The quake was followed by dozens of smaller aftershocks, including a magnitude 3.2 at 4:51 a.m. 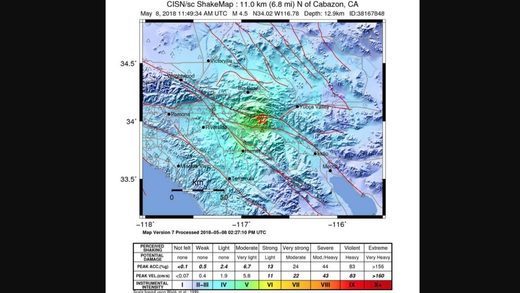 This marks the second time in little more than a month that the region has been hit by a small quake felt over a large area. On April 5, a magnitude 5.3 quake centered in the Channel Islands off Santa Barbara County rattled nerves.

Tuesday’s earthquake occurred along a section of the San Andreas fault zone known for having smaller earthquakes as well as larger ones, said Caltech seismologist Egill Hauksson. It’s known as the “San Gorgonio knot,” named because there are so many small faults that intersect there as the San Andreas fault bends from a northwest-southeast direction to an east-west orientation.

On other parts of the San Andreas fault, where the geometry is simple and the fault is smooth, smaller earthquakes are much less likely to happen, because once a temblor begins, it can more easily grow into a larger earthquake.

“Historically, this area around Mt. San Gorgonio is the only part of southern San Andreas fault that produces smaller quakes,” said the Southern California Seismic Network report, which was co-written by Hauksson. Since 1932, there have been 46 earthquakes of magnitude 4 or greater within six miles of Tuesday’s earthquake.

The magnitude 6.0 Desert Hot Springs earthquake of 1948, located about 30 miles east of Tuesday’s temblor, was felt over a large swath of the region, including Santa Catalina Island, Bakersfield, central Arizona and parts of Mexico, according to Caltech. Damage was widespread, with the shaking breaking water pipes at UCLA and in Pasadena, breaking a water main in San Diego, cracking walls in Corona and Escondido and leaving a furniture store in Palm Springs partially collapsed.

Tracing the exact location of the San Andreas fault’s many strands in this area is difficult because of the large amounts of sediment that have poured from the mountains over the years, covering up evidence of prehistoric earthquake activity, Hauksson said.

Tectonic strain continuously accumulates along this section of the San Andreas fault, as the Pacific plate, upon which lies the city of Los Angeles and Orange County, moves northwest relative to the North American plate, where Lancaster and Victorville sit and which is moving southeast.

Tuesday’s quake was just a “minor adjustment” in the buildup of tectonic strain building up on the San Andreas fault, Hauksson said.

Did anyone just feel the #earthquake in #PalmSprings? It was like a loud train rolling through the area. Woke us up at 4:49 am JB

Stay calm. Breath. It’s over. Little #earthquake in #LosAngeles. Make sure you have an earthquake kit, supplies and communication plan ready. #saddleup #toughenup

Further southeast of the Cajon Pass, the fault has not moved substantially since an earthquake in 1812, and further southeast toward the Salton Sea, it has been relatively quiet since about 1680 to 1690.

Every 100 years, the Pacific plate moves about 16 feet northwest relative to the North American plate. That accumulating strain must be released, eventually, by large earthquakes.

A U.S. Geological Survey scenario of a hypothetical magnitude 7.8 earthquake envisions the rupturing of the San Andreas fault between the Salton Sea and Lake Hughes near the Grapevine section of Interstate 5.

Such a quake could cause a death toll of 1,800; sever pipelines, power lines, roads, railways and aqueducts that cross the San Andreas fault, such as along the Cajon Pass (Interstate 15), the San Gorgonio Pass (Interstate 10) and along Highway 14; and cause strong shaking in downtown L.A. for 55 seconds – nearly eight times longer than what was felt in the 1994 Northridge earthquake.