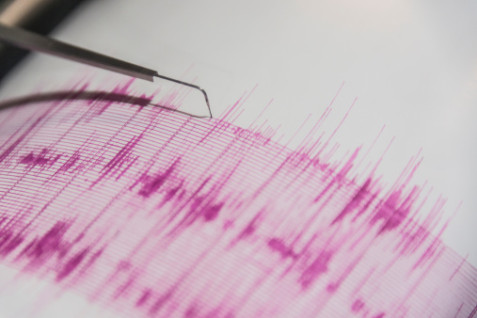 Around 3 p.m. Saturday a 4.8 magnitude earthquake jolted the valley and WAS felt in Yellowstone National Park.

“It’s a small earthquake … but it shook us here in Moose,” reported local geophysicist Dr. Bob Smith of the University of Utah.

Smith, who measures seismic activity in the Greater Yellowstone area for the US Geological Survey, recorded the quake a little higher than USGS officials—at 5.04—which he noted is only a small variance.

The quake happened seven miles east of Bondurant. “It shook for almost 10 minutes ,” Smith noted. “This is an area [near Bondurant] of relatively low seismicity … it is unusual.”

The U.S. Geological Survey reports that the quake occurred at 2:47 p.m. and its epicenter was about 25 miles southeast of Jackson, Wyoming. It was felt by residents as far away as Soda Springs, Idaho Falls, Rigby, Ashton, Driggs, Victor, Felt, Tetonia and Rexburg in Idaho and throughout western Wyoming, including Jackson, Rock Springs, Lander, Thermopolis, Alta, Thayne and Yellowstone National Park. (source: http://idahostatejournal.com/)

The “unusual” locale of the quake has caused some to speculate. Fracking—which is happening less than 100 miles from the site of the quake in Jonah Field—has been linked to earthquakes in other states. Specifically, the injection and disposal wells that store the toxic waste water from fracking can trigger quakes as pressure levels rise. But Smith doesn’t believe fracking is to blame. The earthquakes caused by fracking, he says, typically happen within a few miles of a fracking site. The epicenter of this quake is surrounded by wilderness.

After a series of fracking-triggered quakes in other states, a 2014 study by the Wyoming State Geological Survey investigated the correlation between injection and disposal wells and earthquakes in Wyoming, a state that has long clattered with seismic activity. At five oil and gas sites, scientists could not find a relationship between the wells and seismicity. However, a link was not ruled out at a sixth site, located in Sweetwater County, where WSGS determined more research is needed, according to Sweetwater Now.

Did you feel it? Report where you felt the rattling here.

We probably shouldn’t take lightly or ignore this line in the article, “Smith, who measures seismic activity in the Greater Yellowstone area for the US Geological Survey, recorded the quake a little higher than USGS officials—at 5.04″…can’t say I’m all that surprised by the USGS reading being lower.

And whether it WAS or WAS NOT caused by fracking, is that something they really should be playing with around a resting super volcano?!