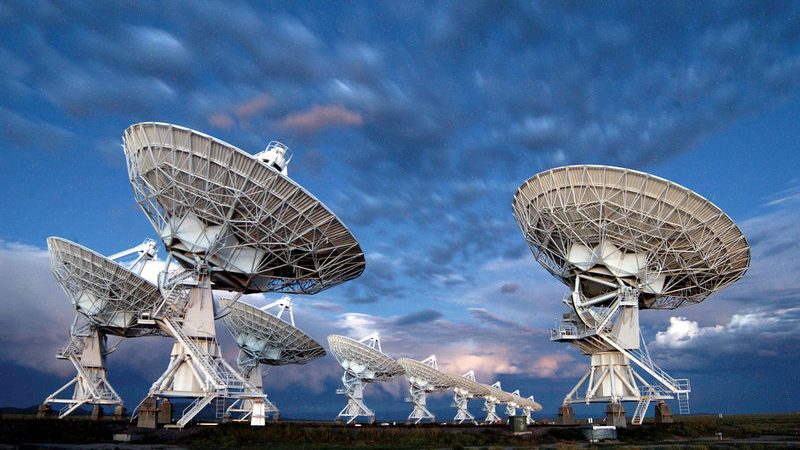 There’s something unusual lurking out in the depths of space: Astronomers have discovered four faint objects that at radio wavelengths are highly circular and brighter along their edges. And they’re unlike any class of astronomical object ever seen before.

The objects, which look like distant ring-shaped islands, have been dubbed odd radio circles, or ORCs, for their shape and overall peculiarity. Astronomers don’t yet know exactly how far away these ORCs are, but they could be linked to distant galaxies. All objects were found away from the Milky Way’s galactic plane and are around 1 arcminute across (for comparison, the moon’s diameter is 31 arcminutes).

In a new paper detailing the discovery, the astronomers offer several possible explanations, but none quite fits the bill for all four new ORCs. After ruling out objects like supernovas, star-forming galaxies, planetary nebulas and gravitational lensing — a magnifying effect due to the bending of space-time by nearby massive objects — among other things, the astronomers speculate that the objects could be shockwaves leftover from some extragalactic event or possibly activity from a radio galaxy.

“[The objects] may well point to a new phenomenon that we haven’t really probed yet,” said Kristine Spekkens, astronomer at the Royal Military College of Canada and Queen’s University, who was not involved with the new study. “It may also be that these are an extension of a previously known class of objects that we haven’t been able to explore.”

Spekkens added that the objects could also be caused by different phenomena. All four ORCs are bright at radio wavelengths but invisible in visible, infrared and X-ray light. But two of the ORCs have galaxies at their center that can be seen at visible wavelengths, which suggests that these objects might have been formed by those galaxies . Two ORCs also appear to be very close together, meaning their origins could be linked.

Astronomers spotted three of the objects while mapping the night sky in radio frequencies, part of a pilot survey for a new project called the Evolutionary Map of the Universe (EMU). The EMU pilot used the Australian Square Kilometer Array Pathfinder, or ASKAP, from July to November in 2019. This radio telescope array uses 36 dish antennas, which work together to observe a wide-angle view of the night sky. They found the fourth ORC in archival data collected by the Giant MetreWave Radio Telescope in India. This helped the astronomers to confirm the objects as real, rather than some anomaly caused by issues with the ASKAP telescope or the way in which the data was analyzed.

With only four of these peculiar objects discovered so far, the astronomers can’t yet tease out the true nature of these structures. But the EMU survey is just beginning, and astronomers expect it to reveal more unusual objects.

By combining an ability to see faint radio objects with a wide gaze, the survey is uniquely positioned to find new objects. EMU scientists have predicted the project will find about 70 million new radio objects — – expanding the current catalog of some 2.5 million.

“This is a really nice indication of the shape of things to come in radio astronomy in the next couple of years,” Spekkens told Live Science. “History shows us that when we open up a new [avenue of looking at] space to explore … we always find new and exciting things.”

The paper, which is available on the preprint site arXiv, has been submitted for publication to the journal Nature Astronomy, where it is still under review.