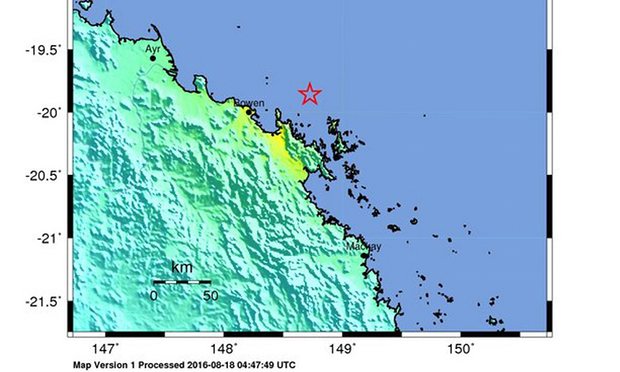 The 5.8 magnitude quake hit off Bowen in state’s north triggering evacuations in Cairns and Townsville but no serious injuries or damage reported

One of the more powerful earthquakes to strike Australia in recent years sent tremors along more than 1,000 km of the Queensland coastline on Thursday.

The 5.8 magnitude quake struck off the coast of Bowen in north Queensland around 2.30pm, triggering evacuations of buildings in Cairns and Townsville but with no reports of serious injuries or damage.

An interview recorded with Greg Williamson, the mayor of Mackay, by the Daily Mercury newspaper captured the sound of a shaking floor when the quake struck, prompting Williamson to ask: “Is that an actual earthquake?”

The tremors reportedly lasted 40 seconds in Mackay, with fainter and shorter echoes felt as far south as the Sunshine Coast and west of Charters Towers.

The Mackay hospital and health service said a baby with a “minor head injury” in Bowen was the sole known casualty from the quake.

Office workers in one Townsville building described a quake that some felt and others did not notice, which did not dissuade council workers from evacuating their building nearby.

In Cairns, a building housing Torres and Cape hospital and health service workers was reportedly evacuated after it started shaking.

Queensland police said there were no reports of major damage.

Geoscience Australia recorded six aftershocks from magnitude 4 to 2.5 in the 90 minutes following the quake.

Siesmologist Hugh Glanville told News Corp Australia it was a “significant” quake for Australia and the “biggest earthquake in Queensland in 20 years”.

“On average we get one or two earthquakes over magnitude 5 each year. We had a magnitude 6 in central Australia earlier this year but this is the biggest in Queensland in 20 years. It’s significant,” he said.

Geoscience Australia seismologist Jonathan Bathgate told the ABC the quake posed no tsunami threat, but a large portion of the Queensland coast felt some shaking.

“We know it’s been felt all the way from the Sunshine Coast up to north of Townsville,” he said.

Australia’s most damaging earthquake in Newcastle in 1989, which killed 13 people and caused $4bn in damage, was magnitude 5.6.