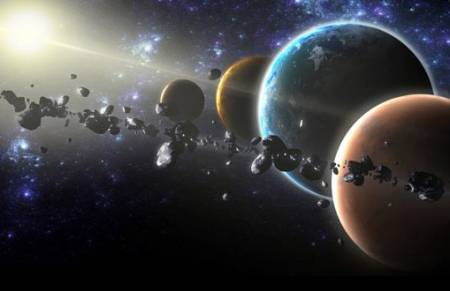 5 EVENTS TO CHANGE THE SOLAR SYSTEM

No. 5 – Ringed Mars: New research has determined that Mars might one day kill its nearest moon, Phobos, which is just 22 kilometers (14 mi) wide. With every passing century, the orbit of Phobos shrinks and brings it closer to Mars by 2 meters. Ultimately, this moon will break apart from tidal stresses caused by the red planet, although the process could take up to 40 million years. In the end, Mars will be short one moon but have a Saturn-like ring to take its place.

No. 4 – Moon falling apart: In the distant future, our Moon is also predicted to become a ring around Earth, however this won’t happen for another five billion years. Unlike the situation with Phobos, the Sun’s red giant phase will most likely tear the Moon apart. When the Sun swells during its red giant phase, its atmosphere will push the Moon so close to Earth, that tidal forces will rip the Moon apart.

No. 3 – Milkomeda: The Milky Way is destined to smash into its neighboring galaxy – Andromeda. As they move toward each other at the dizzying pace of 400,000 km/h, the Milky Way as we know it only has about four billion years left. The collision will be a spectacular cosmic event that will last an incredible one billion years, and result in a reddish elliptical galaxy, possibly called Milkomeda. Despite all the stars in these galaxies, researchers believe that any collisions of the stars or planets are highly unlikely. But anyways, the Sun will be so hot that the oceans will have boiled away by then.

No. 2 – Deadly Cloud: When researchers ran simulations, they discovered that our solar system might eventually hit a deadly space fog. The tiny specks may be lethal to all life on Earth. The danger lies in its denseness. At least 1,000 times heavier than anything that Earth is orbiting through now, this cloud can act like a physical force, pushing back the Sun’s protective heliosphere that shields us from space enemies like cosmic rays. When the cloud meets Earth, the dust and gas can erode the oxygen in our atmosphere. Cosmic rays will zap the world, endangering all living things with a deadly radiation. According to scientists, it’s less than four light-years away, but we still have a few millennia to prepare.

No. 1 – The Big Smashup: Planetary orbital paths aren’t stable and become even less so as time goes by. In a couple of billion years, there’s a small possibility that the planets within our solar system will collide with one another. The path in which Mercury orbits around the Sun might widen enough to cross roads with Venus. Such an encounter could send Mercury hurtling into the Sun, out of the solar system, or on a collision course with Earth. In a less likely event, Mercury might become destabilized by passing too close to Jupiter’s gravitational forces. In turn, this would destabilize Mars. The red planet would become an indirect bullet that Earth would not be able to dodge. By passing too close to Earth, Mars would cause an Earth-Venus smashup by upsetting the orbit of Venus.