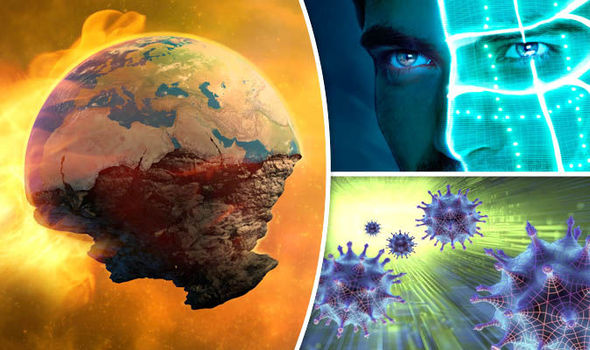 HUMANITY is at threat from these five major problems, including artificial intelligence (AI), bioengineered diseases and the death of the Sun. Could these threats spell the end of the world?

While underdeveloped countries in Africa face the threat of unsustainable population growth and limited resources, many wealthy nations have the opposite problem – a declining population that could pose a threat to the future of humanity.

In 2016 there were 106 nations – just over half listed by the CIA World Factbook – that were below replacement level fertility, meaning that they are not producing enough newborns to replace the previous generation.

In developed countries, an average fertility rate of at least 2.1 births per women is needed to keep population numbers stable.

But in countries such as Germany, Japan and South Korea, the average birth rate is just 1.4 children per woman. In the UK that number grows slightly to 1.89 – still well below the amount needed.

Birth rates are at unsustainable levels in many developed countries

In the 20th Century the Earth’s population quadrupled from 1.6 billion to 6.1 bn as a result of high fertility and low death rates.

But during the past 50 years the average birth rate has halved, due to the widespread introduction of contraception and the trend of women entering the workforce and postponing having children.

Joseph Chamie, former director of the United Nations Population Division, says that there could be “enormous social, economic and environmental consequences for the planet” if the trend of below replacement fertility continues.

The consequences include a population that is both ageing and decreasing, and fewer people available to enter the workforce, build shelter and provide food. 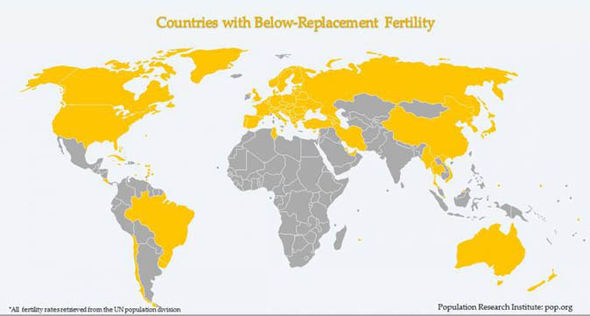 More than half the world’s countries have below replacement fertility

A top geneticist has claimed that humans are getting steadily less intelligent.

Gerald Crabtree of Stanford University believes that if an ancient Greek of average smartness was transported to modern times, he or she would rank among the cleverest people on Earth.

His “speculative theory” of human intelligence is based on the idea that natural selection favoured the smartest of our ancestors.

Mr Crabtree explained: “A hunter-gatherer who did not correctly conceive a solution to providing food or shelter probably died, along with his or her progeny, whereas a modern Wall Street executive that made a similar conceptual mistake would receive a substantial bonus and be a more attractive mate. Clearly extreme selection is a thing of the past.”

He admits that his theory is one that needs testing, and has said that he would happily see it proved wrong.

While falling intelligence might not doom humanity by itself, it could leave us vulnerable to other threats such as…

Over a third of Britons believe that the rise of artificial intelligence (AI) poses a threat to the long term survival of humanity, a YouGov survey for the British Science Association found.

Companies including Google and Facebook are plowing millions into developing computers capable of cognitive functions.

Some believe we are fast approaching the singularity – the point at which AI overtakes humanity and civilisation changes beyond recognition.

It is thought that full AI – computers that are able to replicate human consciousness and reproduce by themselves – could pose a threat to our continued existence.

Professor Stephen Hawking has said that AI could be “either the best or the worst thing ever to happen to humanity – we do not know which”.

Speaking at the opening of a new AI research centre at Cambridge University, he warned that while the technology could bring benefits it “will also bring dangers, like powerful autonomous weapons or new ways for the few to oppress the many”.

He added: “It will bring great disruption to our economy, and in the future AI could develop a will of its own that is in conflict with ours.”

Throughout history humanity has come under threat from diseases such as ebola, the bubonic plague and HIV.

But in the future bioengineered diseases could decimate the world’s population.

Amateur “biohackers” can access tools to edit the genes of diseases and other lifeforms freely online, leading to fears that terrorists could cook up deadly new viruses.

Professor John Parrington of Oxford University has warned: “Who knows what will happen in the future?

“There’s some disquiet among the security services about where this is all leading as you might imagine.”

By far the surest threat to humanity’s existence is the death of our Sun.

Like all stars, the Sun has a limited lifespan. When it has used up all of its hydrogen fuel in around one billion years, its core will begin to contract and its outer layer expand to create a red giant.

This red giant will eventually swallow up Mercury, Venus and Earth.

But before that, the Earth is still under threat. In about one billion years the Sun’s luminosity will increase by around 10 per cent, scorching the Earth and leaving it an uninhabitable steam bath.

By this time, the “habitable zone” where liquid water can exist on a planet’s surface will have moved further out, and Mars might possibly have transformed into a habitable planet.

Eventually Mars will also be baked by the Sun, leaving dwarf planets such as Pluto as our last hope.