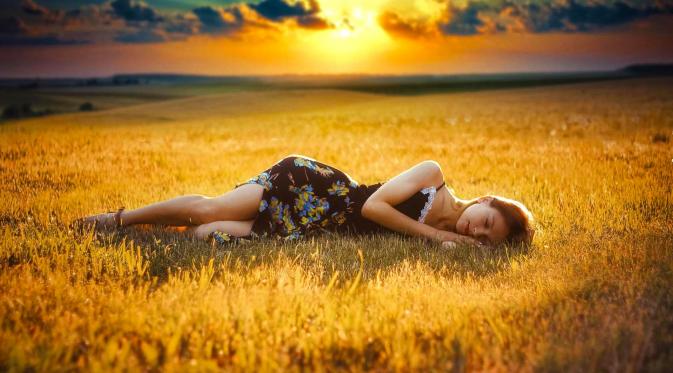 A new survey suggests men and women may dream differently.

There aren’t many things that fascinate, frighten, sadden, intrigue, confuse, or enlighten us more than dreams. While science seems stumped about dreams, artists are inspired, creating countless books, movies, poems, paintings, dances and plays about dreams in an effort to understand more about this mysterious unconscious existence we enter when we sleep.

More than 100 years after Freud wrote The Interpretation of Dreams, we still aren’t exactly sure what a dream really is. Science tells us that our sensory abilities (like vision, hearing, etc.) reside in various areas of the neocortex of our brains, and that during sleep these various areas fire randomly, producing illusions that seem disjointed and enigmatic. (In other words, dream-like.) Freud theorized that dreams were manifestations of our deepest, sometimes darkest desires. Still others have posited that dreams are sort of virtual simulations in which we rehearse threatening situations in case they happen to us in real life (and in fact some dream studies have shown that 70% of dreams involve threats of some kind).

Dreams often draw on our memories, but because long-term memory is associated with another part of the brain, the hippocampus, and the neocortex and the hippocampus don’t communicate well during sleep, our memory dreams are often fragmented and rarely follow a sensible plotline. We also have different kinds of dreams during different stages of sleep. Dreams during early REM sleep (a lighter phase of sleep) tend to incorporate recent memories from our waking hours. Dreams during late-night REM sleep tend toward the strange and fragmented. Non-REM sleep (a deeper sleep) tends to produce shorter but more straightforward dreams.

In the end, we still don’t know why any of this is so, although there is some speculation that dreams help integrate new memories with past experiences. There is also evidence that the free association of dreams helps the brain to be more creative and solve problems more efficiently.

Amerisleep, an online mattress company, recently did a survey of more than 2,000 men and women across America to see how their dreams compared. While the results aren’t strictly scientific, they paint an interesting picture of the shadow world we spend a third of our lives traveling through.

1. The subjects of recurring dreams.

Dreams may start recurring at any point in our lives, but the survey participants most commonly reported (39%) that they began having recurring dreams in childhood, while 21% said adolescence, and 15% said as adults. A full 25% said they had never had a recurring dream.

2. Our jobs may dictate our dreams.

People in certain professions seem more prone to having certain recurring dreams. According to the survey, 74% of people in the telecommunications business have had recurring dreams about falling. Forty-six percent of those in public safety (police, fire, paramedic, security) fly in their dreams. Our randy military personnel lead the pack in dreams about having sex with someone they shouldn’t be having sex with (50%). Fifty-five percent of people who work in journalism, publishing or writing, report having recurring dreams about being back in school. Twenty-six percent of retired people find themselves naked in public. And early childhood education professionals often find themselves unable to find a toilet (25%).

3. The kinds of dreams we have.

Women are the winners in the dream-recall sweepstakes: 24% of female participants remember their dreams almost every night, while 43% remember them at last once a week. Only 14% of the guys can recall their dreams nightly, although 41% can recall them at least once a week. Thirty-three percent of women rarely or never recall their dreams, vs. 46% of men. (This lines up with a study by the Association of Psychological Science, which concluded that women have better short-term memory than men.)

6. What men and women dream about most.

The survey drew a clear line in the types of recurring dreams men and women have. Women tend to have more stressful dreams, whereas men tend to report more positive ones. Fifty-four percent of women have recurring dreams about being chased, while only 48% of men have these dreams. Thirty-two percent of women find their teeth falling out in dreams, vs. 23% of men. Twenty-four percent of women discover their partners are cheating on them, against only 12% of men. Spiders, snakes and other creepy crawlers recur in 21% of women’s dreams vs. 13% of men’s.

Take a look at the full study.

Larry Schwartz is a Brooklyn-based freelance writer with a focus on health, science and American history.