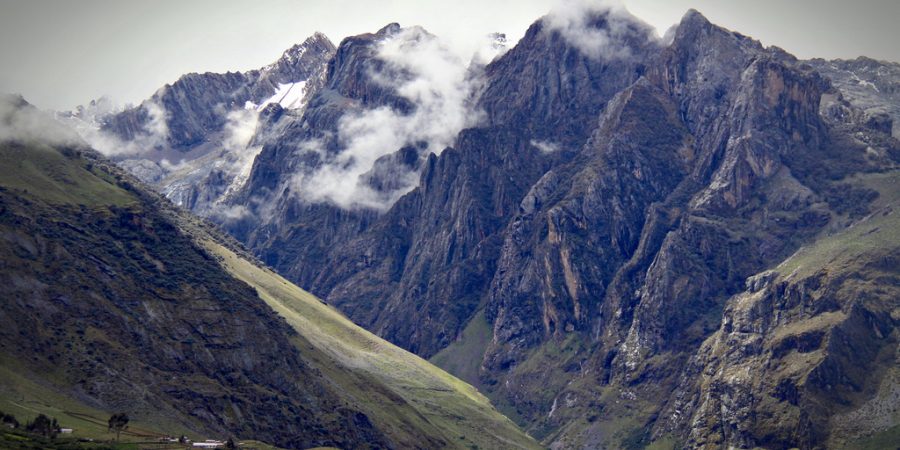 In the Andes Mountains of Peru, the air is gaspingly thin, the climate harsh. Now archaeologists have evidence that humans lived there full-time at least 7,000 years ago, making themselves at home in a spot twice as high as Denver.

And they were equipped with little more than stone tools.

Scientists once thought that people avoided such inhospitable regions until recently. But the new research adds to a growing body of data that humans resided permanently in the most challenging environments even before basic innovations such as farming.

“I know it’s very difficult for me to live there,” says archaeologist Randall Haas, co-author of a new study about the Andean settlement and an archaeologist about to join the University of California, Davis. “I cannot imagine if I were the first person to show up there.”

The place studied by Haas and his team is so spartan that it seems hard to believe anyone chose to live there. Now a farm field, the archaeological site called Soro Mik’aya Patjxa lies some 12,500 feet above sea level on a vast plain in the Andes.

At the regional airport, which is similarly high, “I’ve seen people get off the plane and faint,” Haas says.

Excavations at Soro revealed the graves of 16 people ranging from children to a man of at least 50. Also found were stone arrowheads or spear points, bones probably from the llama-like vicuña, and the apparent remains of wild tubers. Other kinds of food would’ve been scarce, firewood non-existent.

But were people living at Soro year-round at high altitudes or only visiting? Haas cites the chemical composition of the human bones as evidence that the people of Soro didn’t just venture up to the heights to hunt.

The specific forms of oxygen and carbon in the bones point to full-time residence where the air is thin, the researchers say in this week’s Royal Society Open Science.

Further, the distance from Soro to lower altitudes where humans can breathe easy is more than 70 miles. Modern hunter-gathers don’t travel so far to obtain resources, implying that the Soro people lived on the top of the world full-time, the study says.

Finally, none of the tools at Soro are crafted from imported materials. Altogether it’s “the strongest evidence to date for permanent occupation of the Andean highlands,” Haas says. 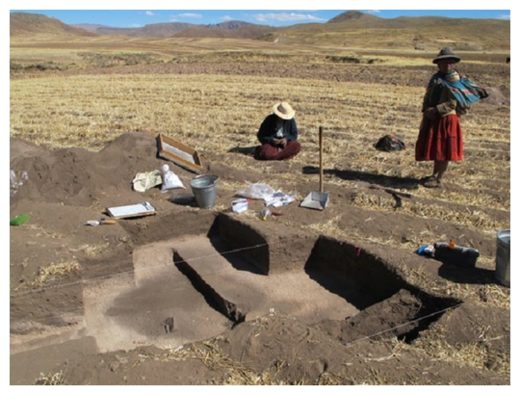 © Randy Haas
Excavations around Soro Mik’aya Patjxa revealed more than a dozen human-made pits, shown near the bottom of this photo as the dark stain contrasting with the light-colored ground. The pit-feature shown here, as with many others at the site, contained human burials made over 7000 years ago.

Other scientists are intrigued. Unlike past research, the new study relies on a wide variety of evidence, including the human bones, says José Capriles of Pennsylvania State University, who was not part of the study team. The study, he says, is “systematic and thorough.”

All the same, he says, there are uncertainties. The stone for the tools, for example, could’ve come from lower elevations. Haas agrees but says that his team examined thousands of bits of stone, and “not one” came from outside the highlands.

The findings are “fascinating” and support the idea that “Andean adaptations to high elevation are very ancient indeed,” says Kurt Rademaker of Northern Illinois University, also unassociated with the study. Rademaker’s own research revealed Andean base camps higher and thousands of years older than Soro, though some scholars harbor skepticism about those conclusions.

All the same, it’s increasingly clear people spent at least part of the year very high in the Andes a very long time ago.

That people were surviving at such extreme altitudes 7,000 years ago “is really mind-blowing,” Haas says. “I have gained a lot of respect for the people who first colonized this region.”