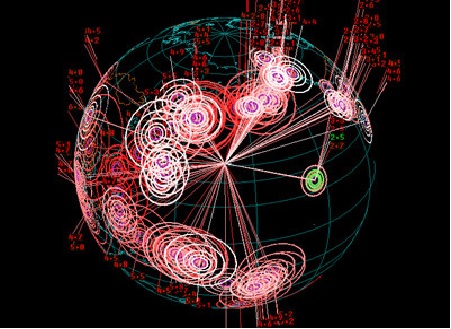 A Big Earthquake Can Trigger Others in Minutes

New findings could have ominous implications for fault-laden California.

Earthquakes that occur on one fault can trigger quakes on other faults as well, a fact known for some time by scientists. Back in 1992, for example, a 7.3 quake that struck in the Mojave Desert,120 miles east of Los Angeles, caused ruptures on five other faults in the region. But In recent years, as we’ve previously reported, they’ve discovered that it happens much more frequently than they realized, which has led them to adjust future predictions of earthquake risks.

Now, a new study by researchers at Scripps Institution of Oceanography at the University of California San Diego, published in the journal Science, shows that the cascading effect is frighteningly fast. A large earthquake on one fault can trigger large aftershocks on separate faults within just a few minutes, the researchers found.

The study’s authors, Scripps geophysicist Peter Shearer and graduate student Wenyuan Fan, analyzed data from seismic stations that are part of the Incorporated Research Institution for Seismology’s global network. They discovered 48 previously unidentified large aftershocks from 2004 to 2015 that occurred within 200 seconds after 27 different magnitude 7 to 8 earthquakes on other faults, some of which were as far as 207.5 miles away.

In one instance cited in the study, a magnitude 7 earthquake off the coast of Indonesia triggered two large aftershocks that were 47 and 137 miles away, respectively, from the main fault, within 68 and 120 seconds of the initial shock.

“The results are particularly important because of their seismic hazard implications for complex fault systems, like California,” study-co-author Fan said in a UCSD press release. “By studying this type of triggering, we might be able to forecast hosting faults for large earthquakes.”

While most aftershocks occur near the main fault rupture, the study proves that large early aftershocks can also be triggered by seismic waves that jump between faults that aren’t directly connected.

“Multiple fault system interactions are not fully considered in seismic hazard analyses, and this study might motivate future modeling efforts to account for these effects,” Shearer explained.

While most of the aftershocks that the scientists detected were in the 5.0 to 6.5 magnitude, which is considered moderate, the scientists wrote that “it is possible that this type of early dynamic triggered could lead to a great earthquake” — that is, one with a magnitude greater than 8.0. That would make it comparable to the 1906 San Francisco earthquake, whose magnitude has been estimated to be between 7.7 and 8.3. That event and its subsequent effects may have killed as many as 3,000 people, according to recent estimates.