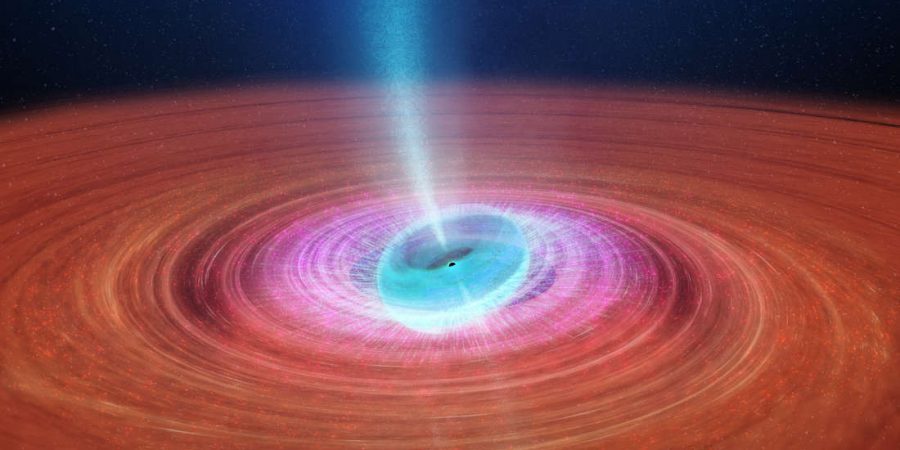 An international team of researchers has discovered a curious feature of the jet of material produced by V404 Cygni, a stellar-mass black hole in the Milky Way. The jet wobbles in periods that can be as short as a few minutes. This happens because the black hole’s gravity is dragging space-time around the jet. As reported in Nature, such a rapid wobble has never been seen before in systems like this.

V404 Cygni weighs nine times the mass of our Sun and is almost 8,000 light-years from Earth. It has a companion star, which is slightly smaller than the Sun, and the black hole steals material from it. This material swirls around the black hole forming a structure called an accretion disk. The part of this disk closest to the black hole is denser and hotter than the rest of it and either this or the black hole itself sends bits of material flying into a jet at 60 percent of the speed of light.

The spin of the black hole and the plane of the disk are not aligned. Because of this, as the black hole’s gravity pulls the space-time around it (an effect known as frame-dragging), the inner part of the disk, which is a few thousand kilometers in diameter, is twisted producing a precession (the wobble) in the jet. The jet is not always pointing in the same direction but it draws a little circle in the sky. 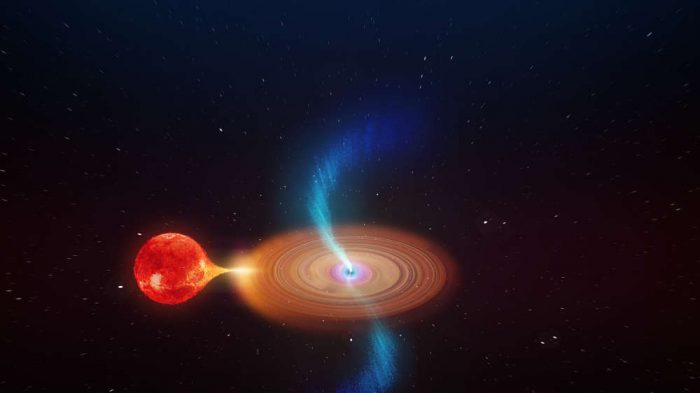 Artist’s impression of the V404 Cygni system (not to scale). ICRAR

“We’ve never seen this effect happening on such short timescales,” team leader Dr James Miller-Jones, of the Curtin University node of the International Centre for Radio Astronomy Research (ICRAR), said in a statement. “This is the only mechanism we can think of that can explain the rapid precession we see in V404 Cygni. You can think of it like the wobble of a spinning top as it slows down, only in this case, the wobble is caused by Einstein’s general theory of relativity.”

The team used the Very Long Baseline Array (VLBA) to collect data but quickly realized that their approach was not going to work. Researchers usually take hours-long observations of these kinds of objects but this time, they encountered a problem.

“These jets were changing so fast that in a four-hour image we saw just a blur,” explained co-author Dr Alex Tetarenko, currently a fellow at the East Asian Observatory in Hawaii.

The team collected 103 individual 70-second images that they then assembled into a movie like a dataset. The behavior of the system in all its uniqueness became clear.

“We were gobsmacked by what we saw in this system – it was completely unexpected,” co-author Dr Greg Sivakoff, of the University of Alberta, added. “Finding this astronomical first has deepened our understanding of how black holes and galaxy formation can work. It tells us a little more about that big question: ‘How did we get here?'”