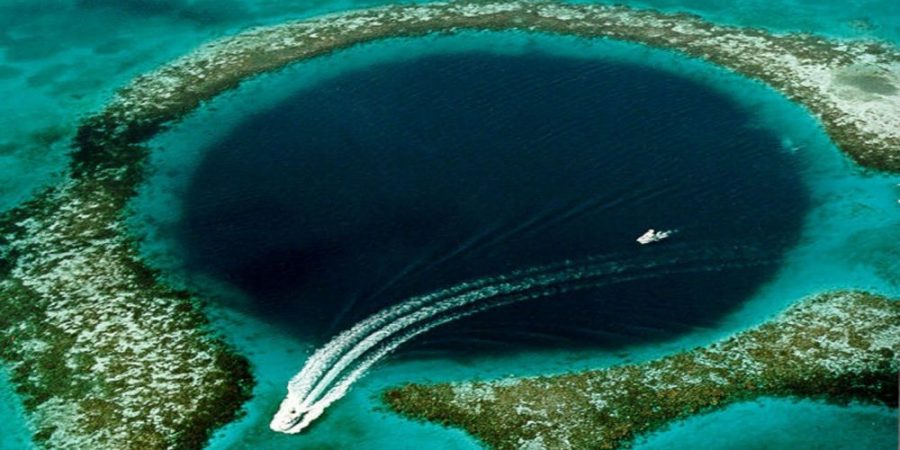 The Great Blue Hole off the coast of Belize, an inky blue marine sinkhole surrounded by a coral atoll and crystal clear waters, is an explorer’s paradise. The dream of exploring this geological oddity was recently realized by an expedition team made up of scientists, filmmakers, Richard Branson, and Fabien Cousteau, the grandson of French explorer Jacques Cousteau who first brought notoriety to the Blue Hole in the early 1970s.

Along with many scientific insights and stunning photographs, the team also came across something particularly sinister at the bottom of the marine sinkhole: the bodies of long-lost divers.

“Mostly it was quiet and dark down there,” Erika Bergman, National Geographic Explorer and submarine pilot, told Newsweek. “We also encountered the resting place for two of the divers who’ve been lost in the hole. We notified the local authorities, and everyone agreed to leave them undisturbed. They are at peace.”

It’s unknown how many people have perished while trying to explore the sinkhole. However, Bergman also told Business Insider last month that this pair is believed to be two of the three people known to have been lost in the sinkhole. At this time, it’s not clear who these divers were nor how they died.

The Great Blue Hole is over 300 meters (984 feet) wide and 125 meters (410 feet) deep, making it the second-largest marine sinkhole in the world after the Dragon Hole in the South China Sea. Marine sinkholes are the relics of past ice ages. In most instances, they were an ancient system of limestone caves. As sea levels rose by hundreds of feet during the last glacial period around 14,000 years ago, the limestone bed dissolved and collapsed, flooding the cave with seawater. Just as this recent expedition showed, you can still see stalactites lining the inside walls of the hole, just like the ones you would see in a cave.

In the sinkhole’s farthest reaches, it is a fiendishly inhospitable environment. Below a certain depth, approximately 90 meters (~300 feet), there’s a cloak of hydrogen sulfide, beyond which the water is totally devoid of oxygen. The veil of hydrogen sulfide itself is highly toxic and corrosive. The recent expedition also noticed that the bed of the marine sinkhole was covered in a “graveyard” of perished marine life.

“Presumably, unsuspecting conchs (or other conch shell inhabitants) have been going just a little too close to the edge and falling into the hole at this entrance by the thousands,” Erika wrote in a blog post. “We can see each conch with little tracks back up the hill trying to escape, then a slide mark where it slid back down after presumably being asphyxiated in the anoxic environment.”