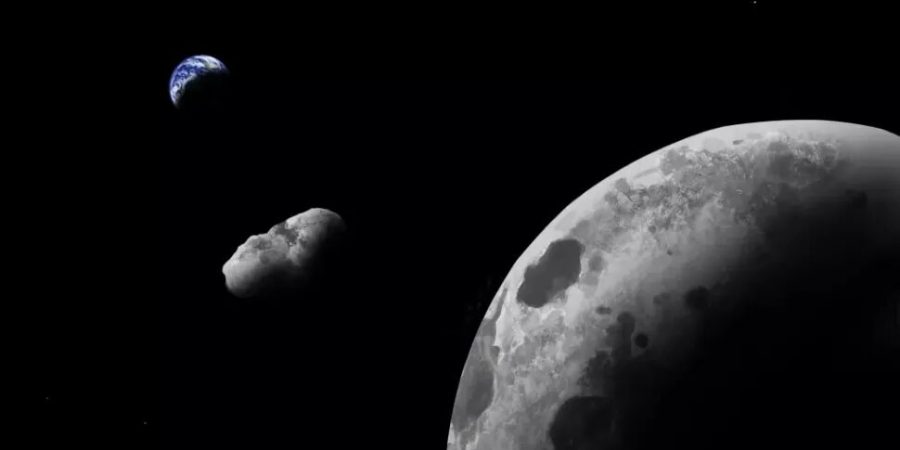 “If Kamo’oalewa is a piece of the smashed-up lunar surface, it’s unclear what exactly kicked it loose, or how it ended up in its current orbit; no near-Earth object with a lunar origin has ever been detected before…”

by Brandon Specktor
via Live Science

The asteroid Kamo’oalewa passes within 9 million miles of Earth every April. It may have once been part of our moon.

A small asteroid orbiting close to Earth could be a fragment of the moon that snapped off during an ancient impact, according to new research published Nov. 11 in the journal Nature Communications Earth & Environment.

If confirmed, that would make the asteroid the first near-Earth object with a known lunar origin — and could help shed light on the chaotic history of our planet and its pockmarked companion, the researchers said.

The asteroid in question is called Kamo’oalewa — a Hawaiian word that roughly means “the oscillating celestial fragment” — and was discovered in 2016 by astronomers using the PanSTARRS telescope in Hawaii.

Though the object is about 4 million times fainter than what humans can see with the naked eye, every April the rock’s orbit brings it close enough to Earth that it becomes briefly visible to our most powerful telescopes. (In this case, “close enough” means about 9 million miles, or 14.4 million kilometers, from Earth — or nearly 40 times the distance between Earth and the moon).

Observations showed that the asteroid measures about the size of a ferris wheel, with a diameter of no more than 190 feet (58 meters).

Because of its near-Earth orbit, Kamo’oalewa fits into a category of celestial objects called quasi-satellites — essentially, objects that orbit the sun, but stay pretty close to Earth. Astronomers have detected plenty of quasi-satellites before, but they have a hard time studying them in detail, given the objects’ typically small size and incredible dimness.

The origins of such tiny travelers are hard to pin down — but the authors of the new paper made an attempt to uncover Kamo’oalewa’s secrets by studying the faint patterns of reflected light on its surface. Using the Large Binocular Telescope on a mountaintop in southern Arizona, the researchers watched Kamo’oalewa closely during its regular April visits for several years.

They found that the asteroid’s light spectrum matched that of lunar samples from NASA’s Apollo missions almost perfectly, suggesting the ferris-wheel-size boulder may be a loose piece of lunar debris. Furthermore, the asteroid’s orbit — which is incredibly similar to Earth’s — is atypical of the rocks that make their way toward our planet from the outer solar system, the researchers added. It seems more likely that the rock has been near us for a long time.

“It is very unlikely that a garden-variety near-Earth asteroid would spontaneously move into a quasi-satellite orbit like Kamo’oalewa’s,” study co-author Renu Malhotra, a planetary sciences professor at the University of Arizona, said in a statement.

If Kamo’oalewa is a piece of the smashed-up lunar surface, it’s unclear what exactly kicked it loose, or how it ended up in its current orbit; no near-Earth object with a lunar origin has ever been detected before, the researchers wrote. However, after analyzing the rock’s orbit, the team found three other near-Earth asteroids with similar enough orbital patterns that they could be considered “companions” to Kamo’oalewa; all of the rocks may have been ejected into space during the same ancient lunar impact.

More research on these quasi-satellites is required to pin down their origins. Luckily, researchers have a few hundred more Aprils to check in with Kamo’oalewa. According to the study authors, the asteroid will remain in its current orbit for another 300 years or so before finally escaping into space.

See you next spring, space neighbor!

Brandon has been a senior writer at Live Science since 2017, and was formerly a staff writer and editor at Reader’s Digest magazine. His writing has appeared in The Washington Post, CBS.com, the Richard Dawkins Foundation website and other outlets. He holds a bachelor’s degree in creative writing from the University of Arizona, with minors in journalism and media arts. He enjoys writing most about space, geoscience and the mysteries of the universe