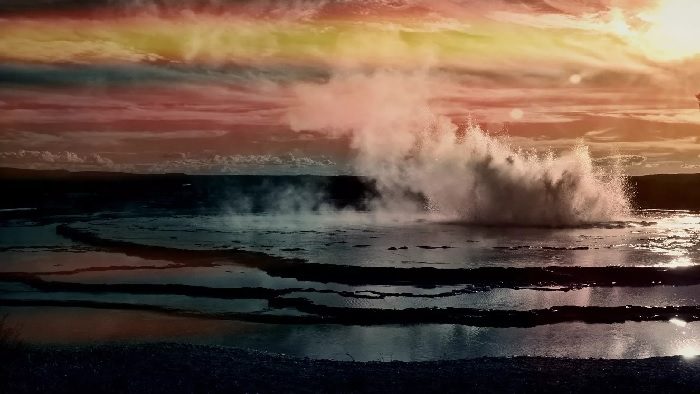 The 3,472-square-mile Yellowstone Park, known for its geothermal features, is located in the western United States and sits on a supervolcano – Yellowstone Caldera.

A colossal lump of molten carbonates is bubbling hundreds of kilometers underneath Yellowstone Park’s supervolcano, and the discovery has changed scientists’ understanding of the carbon cycle.

About 1.8 million square kilometers (700,000 square miles) in size, the liquidized, carbon-infused material lurks in the upper region of the mantle, a research published in the journal Earth and Planetary Science Letters has revealed.

Planet Earth is composed of four layers: the inner core, the outer core, the mantle and the crust. The predominantly-solid mantle lies between Earth’s dense, super-heated core and its thin outer layer, the crust.

A huge network of seismic sensors was used by a team from London’s Royal Holloway, University of London, to discover the carbonate mass. The study used seismic waves, able to travel at different speeds and angles through materials, to probe the mantle.

“Under the western US is a huge underground partially-molten reservoir of liquid carbonate. It is a result of one of the tectonic plates of the Pacific Ocean forced underneath the western USA, undergoing partial melting thanks to gasses like CO2 and H2O contained in the minerals dissolved in it,” lead co-author Sash Hier-Majumder, a senior lecturer in geophysics at Royal Holloway, said.

Furthermore, the research said the newly-discovered cauldron points to the fact that Earth’s upper mantle contains 10,000 times the amount of carbon, in the form of carbon dioxide gas, than was, for example, released into the atmosphere in 2011 predominantly via human activity.

“Releasing only 1% of this CO2 into the atmosphere will be the equivalent of burning 2.3 trillion barrels of oil,” Sash Hier-Majumder added.

For those worried about the impact from the release of this discovered carbon to the surface by way of volcanic eruptions, the scientific team allayed fears. It might have a negligible effect on the rate of climate change, added the research, while also emphasizing that there was no evidence of any carbonatite volcanoes appearing at the surface in Yellowstone Park.