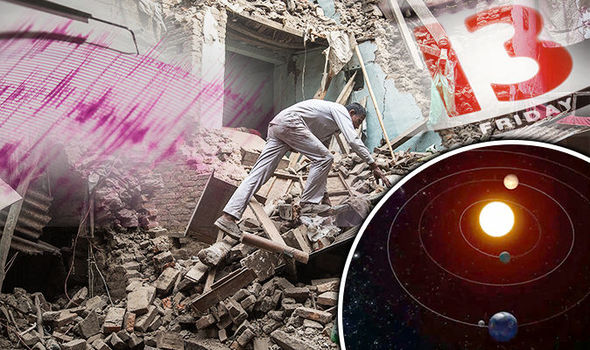 A doom-monger has released a YouTube video claiming the planetary alignment of Earth, Venus and Mercury, coupled with Mars and the Sun linking up at the same time is likely to put more stress on our tectonic plates.

The Ditrianum YouTube channel initially said a significant quake could strike from May 12.

But posts on Ditrianum’s Facebook page today warned there had been a series of tremors across Japan and Taiwan and seismic activity was increasing.

According to earthquake records available online, there was today a swarm of tremors across Taiwan from magnitude 5.6 to 6.2.

A 5.6 magnitude earthquake hit the capital city Taipei and, according to US Geological Survey, the quake struck eight miles northeast of the coastal town of Su-ao.

Local media said the earthquake rocked high-rise blocks, people were trapped and there were power failures.

There were also a number of four and five magnitude ones in Japan, where the Shiveluch volcano has been growing a lava dome since Monday.

“Between now and midnight, the Mercury-Venus resonance will influence the Americas.

“There is no way to know if larger seismic activity is going to occur, but it is a good thing to be prepared, just in case.”

He said in a video released on YouTube last week: “Planetary alignments converging like this is a critical time and we can have large earthquakes.

“From the 12 to the 15 May if you look at the Earth harmonics, we see a timeframe for a possible large earthquake, possibly above magnitude 8.6.

“This is a timeframe to be on high alert because of the planet alignments and Earth harmonics.”

Mr Hoogerbeets, who is based in the Netherlands, claims to use planetary alignment forecasts to predict when and where an earthquake may strike on Earth, before posting videos warnings.

This theory has been dismissed by some scientists as nonsense.

He claims the positions of the planets and the moon have an impact on tectonic plate movement here on earth.

He has remarkably claimed to have predicted the major earthquakes which struck Japan last month and five others in 2015, but he has also been spectacularly wrong on other occasions, including the much publicised megaquake he warned was about to hit California last May – but it too never arrived.

He is ridiculed by mainstream scientists who say the position of the planets has no impact on seismic activity, but still has a significant online following.

The forecaster also relies on messages from spirits, crop circle formations, planetary alignments, and so-called “key Earth dates” in order to predict when one will strike – techniques that have no scientific backing or substance.

He admits there is no science behind his theory.

One online poster said: “There’s no reason to be scared. He cannot predict tectonic plate movement and the planets can’t either.”

Astronomer Phil Plait, who writes for New Scientist, has previously blogged about his predictions: “Let me be clear: No, it won’t. It can’t.

“There is simply no way an alignment of planets can cause an earthquake on Earth. It’s literally impossible.

“This all stems from a video by someone who I believe is sincere but also profoundly wrong on essentially every level.”