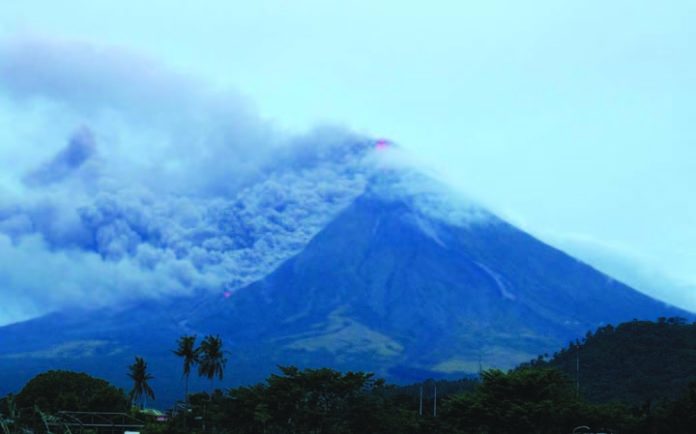 A Single Volcano is Capable of Changing Earth’s Entire Atmosphere

A single volcano can change the world’s atmosphere, even permanently, depending on the intensity of the volcanic eruption, a pollution expert said.

According to Mylene Cayetano, PhD, the head of the Environmental Pollution Studies Laboratory of the Institute of Environmental Science and Meteorology at University of the Philippines Diliman, on top of being a fiery spectacle of nature, volcanoes are a force to be reckoned with.

“A single volcano has the ability to completely change the world’s entire atmosphere, maybe even permanently,” Cayetano said in statement. Cayetano issued the statement in light of the Philippine Institute of Volcanology and Seismology (Phivolcs) statement that Mayon’s restiveness is still far from the peak of explosion, which may come in the coming weks.

According to Cayetano, Southeast Asia is one of the most geologically active regions, of the world, if not the most, and had been home to the most destructive and powerful volcanic eruptions in history. Mayon, one of the world’s renowned volcanoes because of its almost-perfect conical shape, is the most active volcano in the Philippines.

Some of the historic explosions in this region have made critical impacts in the atmosphere, she said. Among them is Tambora in Indonesia, 1815; Pinatubo, the Philippines, in 1991, which cooled the entire world by half a degree Celsius; Mount Samalas, Indonesia, in the 13th century, which may have plunged medieval Europe into a series of famines due to anomalous weather changes that ensued; and Krakatoa in 1883, also in Indonesia, which also cooled the entire world.

While it is a common belief that volcanic eruptions has benefits, such as cooling effects and replenishing the topsoil with volcanic minerals that, in the long term, boost soil fertility, Cayetano explained its effects, and what happens immediately after a volcanic eruption.

“In the Philippines it is easy to feel the effects of a nag-aalburutong [rumbling] volcano, such as ashfall, including difficulty in breathing, or even crop failure. While we already know the long-term effects of volcanic eruptions to the atmosphere, it’s also important to take into account the finer details of its effects,” she said.

She added adaptation to effects of volcanic eruption is normal for communities living near volcanoes in the Philippines, which sits at the western edge of the Pacific Ring of Fire.

In the province of Albay, where Mayon Volcano, also called Mount Mayon, sits, people have learned to adapt to volcanic eruptions.

According to Cayetano, increased activity of Mayon, which includes more lava flows and fountaining, and an increase in emission of volcanic gases like sulfur dioxide, is something to worry about because of its potential adverse impact to human health.

Fine dust from pyroclastic density currents, due to its small size, can be suspended in the air, and may eventually reach residential areas outside the danger zone, she warned.

“If not washed off by rain, [the fine dust] may spread farther. If inhaled, the dust may trigger premature asthma attacks, allergic rhinitis, throat irritation, runny nose or sore eyes,” Cayetano said.

A chemist, Cayetano pointed out that the sulfur dioxide in the atmosphere may become acid rain in a matter of hours, which can injure the skin and damage crops and infrastructure, as well as disrupt bodies of water.

“Acid rain may impact the surrounding vegetation by damaging the leaves and crops, due to its corrosive character,” she added. Acid rain can directly contribute to the acidity of the ground, thus, reduce the potential of beneficial microorganisms in the soil to thrive, and essential soil nutrients to be available, [diminishing] the overall fertility of the affected area,” Cayetano noted.

With regard to fresh bodies of water, acid rain can also increase the alkalinity of lakes, rivers and even those dedicated to aquaculture, she said.

“When the alkalinity is altered, the growth of phytoplankton necessary for feeding fish might be inhibited, thus, threaten the habitat of fish,” she explained.