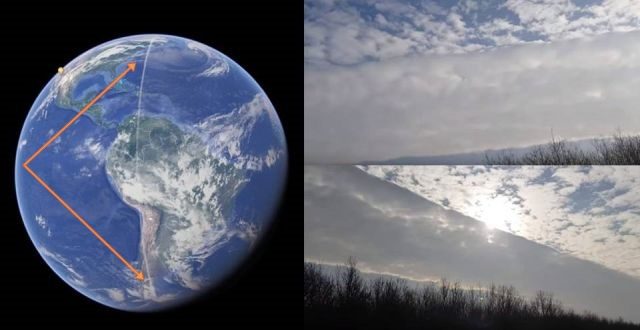 It’s amazing how things like this don’t make the mainstream news even as a side story.

Several days ago there was a really bizarre observation on Google Earth and Google Maps.

A baffling line of thousands of miles that extended from the South Pole, Antarctica to the North Pole has not only spotted on Google Earth and Google Maps but may have been spotted from the International Space Station too.

There is a lot of discussion going on what this huge line could be. The mysterious line seems to be a form of energy or a frequency that the Earth was detected from something big.

Despite some people suggest that it is a processing glitch it clearly has a physical construction.

While the online community still discusses about the strange phenomenon, a video has surfaced of a gigantic bizarre straight line soaring through the sky over the Netherlands.

The witness who submitted the footage to MrMB333 writes:

“Just to share a really strange cloud line in the sky above the Netherlands I’ve spotted on February 20, 2018.”

“Some strange straight lined cloud formation, quite wide and reaching beyond the vanishing point of my eyes.”

“The cloud line seems to be of a different kind of cloud material then the other clouds around and behind it.”

It looks like the ‘giant line’ on Google earth WAS real after all, the question is; what is the origin of this phenomenon, where does this come from, taking into account the observation of the giant line over the Netherlands that the cloud material seems to be artificially created.