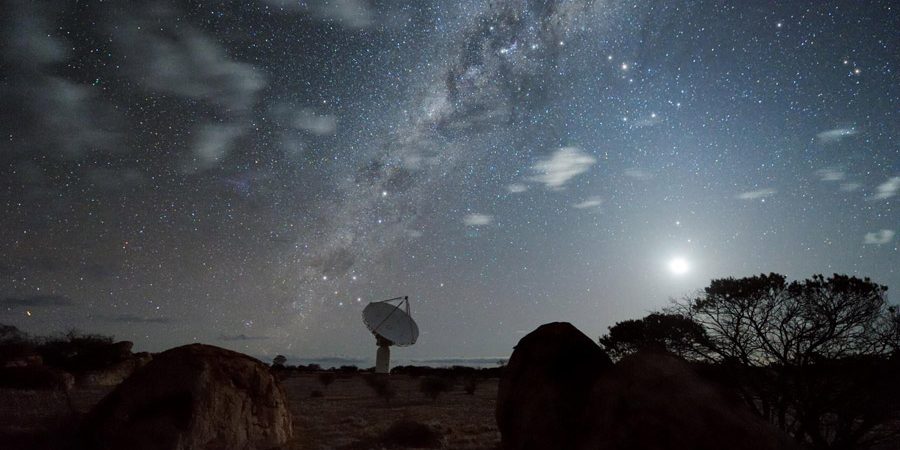 Australian Aborigines probably observed the cyclical changes in the brightness of pulsating red giant stars such as Antares, Betelgeuse, and Aldebaran. They integrated their observations into their oral traditions – cultural narratives that served as a system of laws, social rules, and general knowledge transmission.

European astronomers realized that red giants changed in brightness in 1596, when David Fabricius registered the variability of the star Mira. Johannes Hevelius went on to calculate the amplitude and periodicity of Mira’s changes in 1662. But the oral traditions of Australian Aborigines could go much further back in time: they have inhabited the fifth continent for more than 65,000 years. Research examining oral tradition for geological events, such as volcanic eruptions or meteorite impacts, have shown that such oral traditions can survive for thousands of years.

Duane Hamacher (Monash University and University of Southern Queensland, Australia), found new references to variable stars after reinterpreting the accounts of 19th- and 20th-century anthropologists and ethnologists, who recorded some of the Aboriginal oral traditions. His results are being published in a new study in the Australian Journal of Anthropology.

According to Hamacher, anthropologists sometimes misinterpreted Aboriginal accounts in the past, wrongfully assuming them to refer to planets in the solar system rather than stars.

“Many anthropologists had limited training in astronomy, so misidentifications, conflated terminology, and errors were not uncommon,” Hamacher says. “Mars and Antares are often mixed up because of their comparable brightness and occasional close proximity.”

Hamacher found two oral traditions that referenced the variable stars Betelgeuse, Antares and Aldebaran. Their changes in brightness carried important weight in the narratives and helped encode certain social rules, such as signaling to the tribe when to celebrate initiation rituals.

This is the first clear evidence of indigenous peoples observing and recording stellar variation in oral traditions. The only widely accepted record of a pulsating variable comes from an Egyptian papyrus called the Cairo calendar, which predicted good and bad luck periods throughout the year, dated around 1200 B.C. A statistical analysis of those periods revealed that they followed the variation of the eclipsing binary star Algol.

Hamacher reinterpreted two oral traditions that might be best explained by long-term observation of variable stars.

The first one has a striking similarity to the Western story of Orion (the Hunter) and the Pleiades (the Seven Sisters). In this legend, a man called Nyeeruna (Orion) is a skilled hunter who is attracted by the Yugarilya sisters (the Pleiades) and pursues them across the sky. Another character stands between them: Kambugudha, the eldest of the sisters, represented by the Hyades star cluster.

Kambugudha taunts Nyeeruna, who in turn hefts his club in his right hand (Betelgeuse). It fills with “fire magic,” ready to throw. But Kambugudha lifts her left foot (Aldebaran), which also fills with fire magic, to kick dust into Nyeeruna’s face. This humiliation makes Nyeeruna’s magic fade. However, his magic recharges more quickly than Kambugudha’s, and he tries to reach the sisters again. Kambugudha, her magic now depleted, calls for a row of dingo pups to protect them – they’re represented by the row of stars that in Greek mythology form Orion’s shield. They also fail to repel Nyeeruna´s advances, so Kambugudha calls the father dingo Babba – represented by Beta or Zeta Taurii – who attacks Nyeeruna until his magic fades again.

Hamacher interprets the brightening and fading of fire magic as the variability of the stars. The fact that Nyeeruna’s magic refills more quickly than Kambugudha’s is related to the different stellar variation periods. Betelgeuse completes about four cycles for each one of Aldebaran’s. This tradition was first registered by amateur anthropologist Daisy Bates in 1921, but he attributed the increasing fire magic of Betelgeuse to the “effects of radiations from nebulae.” Ethnographers of the day also failed to link the narrative to variable stars.

In the second tradition, a young man called Waiyungari is undergoing an initiation rite that requires him to avoid contact with women. But the two wives of his bother Nepeli feel attracted to him, so they approach his hut magically disguised as emus, making sounds to draw him out. Waiyungari pursues the emus, and the women recover their human form and seduce him. When Nepeli discovers their betrayal, he set fire to the hut where his brother and wives are sleeping. The adulterous trio escapes and, to avoid further punishment, Waiyungari casts a spear into the Milky Way to pull himself and both women up into the sky.

In the legend, Waiyungari becomes a bright, pulsating red star; the two women become fainter stars flanking him on either side. When Waiyungari’s brightness increases, it signals the beginning of the Aboriginal initiation rites, when young men must refrain from being around women.

Hamacher suggests that, in this case, the red star is Antares. Anthropologists who first recorded the tradition had misidentified it as Mars. Tau and Sigma Scorpii, fainter white stars with comparable brightness, flank Antares.

People with good eyesight can usually notice a star’s brightness vary by as little as 0.1 magnitude by comparing it with reference stars. The brightness variation of all the stars described in these traditions is larger than that: Antares oscillates between +0.6 and +1.6, Betelgeuse between 0.0 and +1.3, and Aldebaran between +0.75 and +0.95. According to Hamacher, Aboriginal Australians were keen observers who paid very close attention to the stars and their properties and could have noticed such changes.

They also noted the different cycles over which these stars fluctuated. A great example is the Nyeeruna tradition, where the magic of the different characters, or stars, takes different periods of time to recharge. Betelgeuse (Nyeeruna’s weapon) brightens and fades over shorter cycles than Aldebaran (Kambugudha’s foot). The variability of both stars is consistent with legend, since Betelgeuse has a primary period of 388±30 days and a secondary period of 2050±460 days, and Aldebaran is an irregularly varying orange giant with a longer average period.

Considering the periods of the stars included in both traditions, Hamacher estimates that a pre-colonization inhabitant of these lands could have witnessed roughly 47 primary periods for Betelgeuse and 11 for Antares, assuming a lifespan of 40 to 60 years.

Indigenous accounts could be a useful source of information for astronomers studying the history of astronomical observations of comets, eclipses, and supernovae, Hamacher argues. “Due to colonialism, this [depth of knowledge] is often not taken as seriously as it should be,” Hamacher says. “Scientists need to work closely, respectfully, and collaboratively with indigenous elders and communities to share knowledge for a mutually beneficial future.”