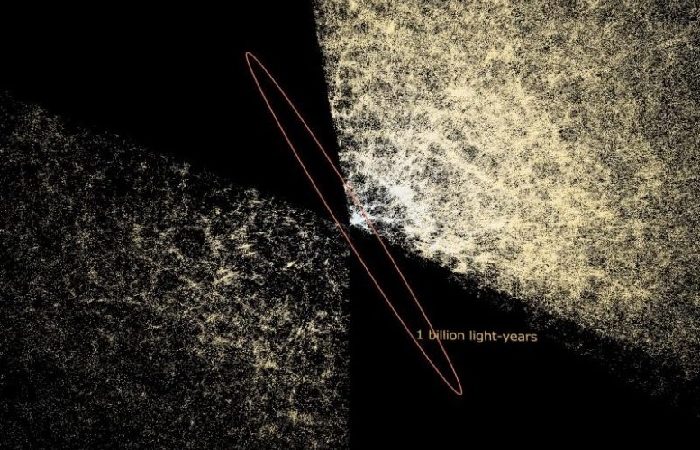 The way in which galaxies cluster together in the Universe is made clear in this image of the Universe as observed by the Sloan Digital Sky Survey (SDSS). The yellow dots represent the position of individual galaxies, while the orange loop shows the area of the Universe spanning 1 billion light-years. At the center is Earth, and around it is a three-dimensional map of where different galaxies are. The image reveals how galaxies are not uniformly spread out throughout the Universe, and how they cluster together to create areas called filaments, or are completely absent in areas called voids. Credit: Tsunehiko Kato, ARC and SDSS, NAOJ Four-Dimensional Digital Universe Project

The origin of how the Universe created its voids and filaments can now be studied within seconds after researchers developed an artificial intelligence tool called Dark Emulator.

Advancements in telescopes have enabled researchers to study the Universe with greater detail, and to establish a standard cosmological model that explains various observational facts simultaneously. But there are many things researchers still do not understand. Remarkably, the majority of the Universe is made up of dark matter and dark energy, of which no one has been able to identify their nature. A promising avenue to solve these mysteries is the structure of the Universe. Today’s Universe is made up of filaments where galaxies cluster together and look like threads from far away, and voids where there appears to be nothing (image 1). The discovery of the cosmic microwave background has given researchers a snapshot of what the Universe looked like close to its beginning, and understanding how its structure evolved to what it is today would reveal valuable characteristics about what dark matter and dark energy is.

A team of researchers, including Kyoto University Yukawa Institute for Theoretical Physics Project Associate Professor Takahiro Nishimichi, and Kavli Institute for the Physics and Mathematics of the Universe (Kavli IPMU) Principal Investigator Masahiro Takada, used the world’s fastest astrophysical simulation supercomputers ATERUI and ATERUI II to develop the Dark Emulator. Using the emulator on data recorded by several of the world’s largest observational surveys allows researchers to study possibilities concerning the origin of cosmic structures, and how dark matter distribution could have changed over time.

The conceptual design of Dark Emulator. Left: an example of the virtual Universe created by “ATERUI II” supercomputer. It shows the distribution of about 10 billion particles in a volume encompassing about 4.9 billion light-years evolved until today. It takes about 2 days using 800 CPU cores in “ATERUI II”. Center: The architecture of Dark Emulator. It learns the correspondence between the fundamental cosmological parameters employed at the beginning of a simulation and its outcome based on a machine-learning architecture with hybrid implementation of multiple statistical methods. After training, the machine now immediately predicts accurately the expected observational signals for a new set of cosmological parameters without running a new simulation. This allows us to drastically reduce the computational cost needed for the extraction of cosmological parameters from observational data.

“We built an extraordinarily large database using a supercomputer, which took us three years to finish, but now we can recreate it on a laptop in a matter of seconds. I feel like there is great potential in data science. Using this result, I hope we can work our way towards uncovering the greatest mystery of modern physics, which is to uncover what dark energy is. I also think this method we’ve developed will be useful in other fields such as natural sciences or social sciences,” says lead author Nishimichi.

This tool uses an aspect of artificial intelligence called machine learning. By changing several important characteristics of the Universe, such as those of dark matter and dark energy, ATERUI and ATERUI II have created hundreds of virtual Universes. Dark Emulator learns from the data, and guesses outcomes for new sets of characteristics without having to create entirely new simulations every time. When testing the resulting tool with real-life surveys, it was able to successfully predict weak gravitational lensing effects in the Hyper Suprime-Cam survey, along with the three-dimensional galaxy distribution patterns recorded in the Sloan Digital Sky Survey to within 2 to 3 percent accuracy, in a matter of seconds. In comparison, running simulations individually through a supercomputer without the AI, would take several days.

The researchers hope to apply their tool using data from upcoming surveys in the 2020s, enabling deeper studies of the origin of the Universe.

Details of their study were published in the Astrophysical Journal on October 8, 2019.