Air Travel Brings Health Risks From Radiation Exposure – Is It Worth It?

This past April, business traveler Tom Stuker became the world’s most frequent flyer, logging 18,000,000 miles of air travel on United Airlines over the last 14 years.

That’s a lot of time up in the air. If Stuker’s traveling behaviors are typical of other business flyers, he may have eaten 6,500 inflight meals, drunk 5,250 alcoholic beverages, watched thousands of inflight movies and made around 10,000 visits to airplane toilets.

He would also have accumulated a radiation dose equivalent to about 1,000 chest x-rays. But what kind of health risk does all that radiation actually pose?

Cosmic rays coming at you

You might guess that a frequent flyer’s radiation dose is coming from the airport security checkpoints, with their whole-body scanners and baggage x-ray machines, but you’d be wrong. The radiation doses to passengers from these security procedures are trivial.

The major source of radiation exposure from air travel comes from the flight itself. This is because at high altitude the air gets thinner. The farther you go from the Earth’s surface, the fewer molecules of gas there are per volume of space. Thinner air thus means fewer molecules to deflect incoming cosmic rays – radiation from outer space. With less atmospheric shielding, there is more exposure to radiation.

The most extreme situation is for astronauts who travel entirely outside of the Earth’s atmosphere and enjoy none of its protective shielding. Consequently, they receive high radiation doses. In fact, it is the accumulation of radiation dose that is the limiting factor for the maximum length of manned space flights. Too long in space and astronauts risk cataracts, cancer and potential heart ailments when they get back home.

Indeed, it’s the radiation dose problem that is a major spoiler for Elon Musk’s goal of inhabiting Mars. An extended stay on Mars, with its extremely thin atmosphere, would be lethal due to the high radiation doses, notwithstanding Matt Damon’s successful Mars colonization in the movie “The Martian.” 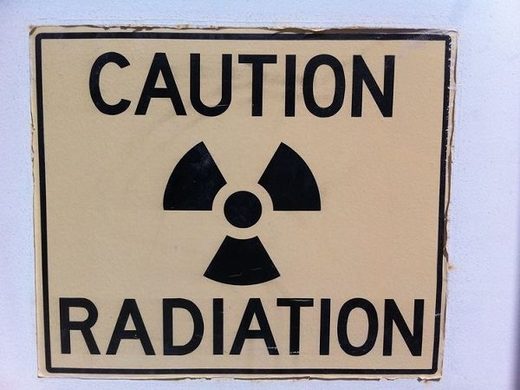 © John Jones
Air travel means exposure to some radiation… but how much are we talking about?

What would be Stuker’s cumulative radiation dose and what are his health risks?

It depends entirely on how much time he has spent in the air. Assuming an average flight speed (550 mph), Stuker’s 18,000,000 miles would translate into 32,727 hours (3.7 years) of flight time. The radiation dose rate at typical commercial airline flight altitude (35,000 feet) is about 0.003 millisieverts per hour. (As I explain in my book “Strange Glow: The Story of Radiation,” a millisievert or mSv is a unit of radiation dose that can be used to estimate cancer risk.) By multiplying the dose rate by the hours of flight time, we can see that Stuker has earned himself about 100 mSv of radiation dose, in addition to a lot of free airline tickets. But what does that mean for his health?

The primary health threat at this dose level is an increased risk of some type of cancer later in life. Studies of atomic bomb victims, nuclear workers and medical radiation patients have allowed scientists to estimate the cancer risk for any particular radiation dose.

All else being equal and assuming that low doses have risk levels proportionate to high doses, then an overall cancer risk rate of 0.005 percent per mSv is a reasonable and commonly used estimate. Thus, Stuker’s 100-mSv dose would increase his lifetime risk of contracting a potentially fatal cancer by about 0.5 percent.

The question then becomes whether that’s a high level of risk. Your own feeling might depend on how you see your background cancer risk.

Most people underestimate their personal risk of dying from cancer. Although the exact number is debatable, it’s fair to say that about 25 percent of men ultimately contract a potentially fatal cancer. Stuker’s 0.5 percent cancer risk from radiation should be added to his baseline risk – so it would go from 25 percent to 25.5 percent. A cancer risk increase of that size is too small to actually measure in any scientific way, so it must remain a theoretical increase in risk.

A 0.5 percent increase in risk is the same as one chance in 200 of getting cancer. In other words, if 200 male travelers logged 18,000,000 miles of air travel, like Stuker did, we might expect just one of them to contract a cancer thanks to his flight time. The other 199 travelers would suffer no health effects. So the chances that Stuker is the specific 18-million-mile traveler who would be so unlucky is quite small.

Stuker was logging more air hours per year (greater than 2,000) than most pilots typically log (under 1,000). So these airline workers would have risk levels proportionately lower than Stuker’s. But what about you?

If you want to know your personal cancer risk from flying, estimate all of your commercial airline miles over the years. Assuming that the values and parameters for speed, radiation dose and risk stated above for Stuker are also true for you, dividing your total miles by 3,700,000,000 will give your approximate odds of getting cancer from your flying time.

To make your exercise complete, make a list of all the benefits that you’ve derived from your air travel over your lifetime (job opportunities, vacation travel, family visits and so on) and go back and look at your increased cancer risk again. If you think your benefits have been meager compared to your elevated cancer risk, maybe its time to rethink flying. But for many people today, flying is a necessity of life, and the small elevated cancer risk is worth the price.