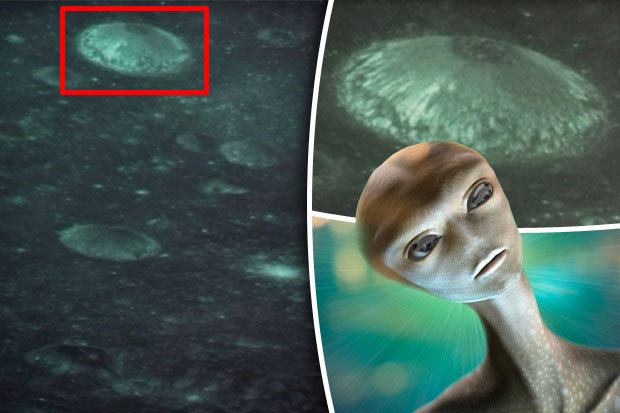 Alien Base on the Moon: Dome Like Structure Spotted On the Surface of the Moon

Have UFO hunters discovered an Alien Base on the Moon? Dome like structure spotted on the surface of the moon is the ultimate evidence of Aliens say UFOhunters

According to reports from Alien hunters and Ufologists, a huge, dome-like structure has just been discovered on the moon. Ufologists indicate that the massive structure is, at least, nine miles wide, and is the ultimate piece of evidence suggesting there are ‘alien’ bases all over the moon.

However, responding to claims of alien structures on the moon, scientists have responded it just a crater, and light conditions and angles make it look as if it were one, but… it’s not.

YouTuber Tony Wilke spotted the shape in a photo of the lunar landscape taken during NASA’s Apollo missions.

Scot C Warring from UFO sightings daily wrote: ““As you can see for yourself this is a dome on Earth’s moon,” he said. “Scientists have mislabeled it as a crater when obviously it’s a dome.”

“This is mislabeled in astronomy as Harden Crater. I don’t blame the scientists. It’s just the way education goes in school.”

The finder of the alleged ‘dome’ on the moon, Mr. Wilke said:

“When these domes were constructed and completed they were completely clear,” he said.

“You could take a hundred foot by a hundred-foot block of glass that they make you could see perfectly clear to the other side without any distortion at all.

“But this is just the result of deterioration after millions and millions of years.”

The mysterious image was found not long after the Science Channel is preparing an interesting episode of ‘NASA’s unexplained Files’, where they will offer recordings of a mysterious ‘music’ which were heard by Apollo 10 Astronauts while they were orbiting the ‘far side’ of the moon.

Ufologists have speculated for years that something’s just ‘off’ with Earth’s moon. Not only has NASA avoided sending astronauts to the surface of the moon after the Apollo program, they haven’t shown particular interest in going back, even though today’s technology would make it much easier.

Is it possible that these mysterious alien structures exist? And what if it we aren’t looking at the image of a crater as scientist suggest?

In the 1970’s Mikhail Vasin and Alexander Shcerbakov from the Soviet Academy of science wrote an article called: “Is the Moon the creation of Alien Intelligence?” It was a very interesting article that asked some important questions. How is it possible that the surface of the moon is so hard and why does it contain minerals like Titanium? Mysteriously, there are some lunar rocks that have been found to contain PROCESSED METALS, such as Brass, processed Mica and the elements of Uranium 236 and Neptunium 237 that have NEVER been found to occur naturally.

Yet there are traces of them on the Moon.

Uranium 236 is a radioactive nuclear waste which is found in spent nuclear and reprocessed Uranium. More interestingly, Neptunium 237 is a radioactive metallic element and a by-product of nuclear reactors and the production of Plutonium. You have to ask the question: What is happening on Earth’s Moon? From where are these elements and minerals coming from? Is it possible that the presence of these minerals can be explained by numerous ‘Alien’ bases on the moon?

Whether or not this is, in fact, an alien base on the moon isn’t that important at all, what is important is the fact that there are countless unexplained mysteries surrounding the moon, the apollo missions and mysterious ‘structures’ that have been discovered on the surface of the moon in the last decade.