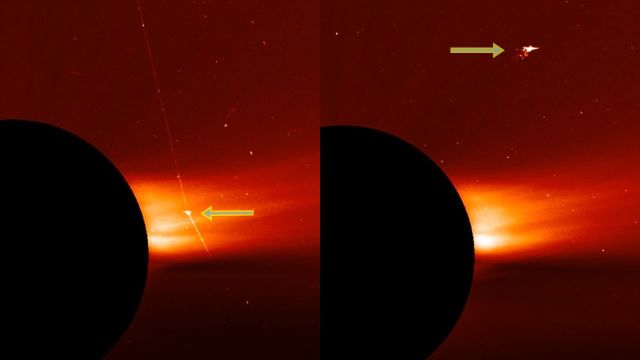 NASA’s Satellite Lasco C2 has transmitted images of an alien spacecraft near the Sun on October 12, 2020. A day later probably the same UFO, has been captured again, but now much further away from the sun.

The UFO which appears to be firing a huge laser beam into space is only visible in a single frame Skip to the slow motion clip at 1.50 minutes if you want to see clear images of the UFO at 1.55 and 2.42 minutes.

It’s known that high energy particles hitting the camera all the time and sometimes it turns out that an unidentified object is just a camera reflection but in recent years enough evidence has been gathered to know that many objects near the sun are not always reflections or high energy particles but huge spacecraft mostly under under intelligent control.