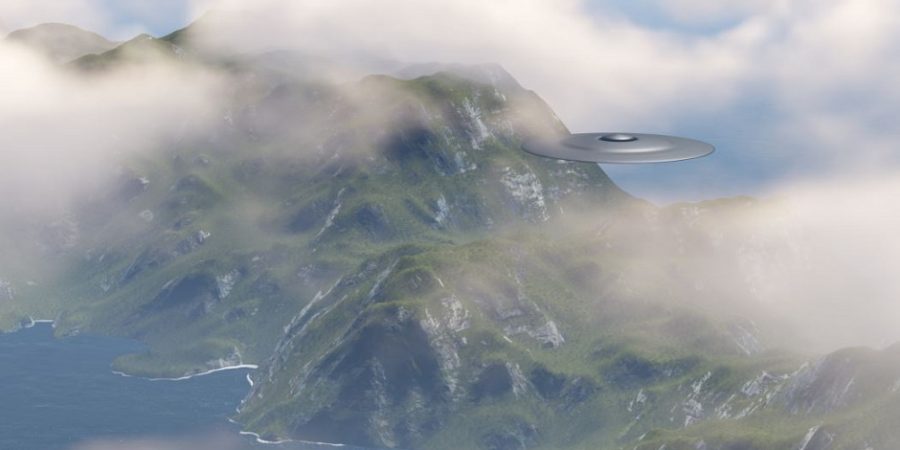 An alien UFO spaceship that may have been a flying saucer has been captured on camera lifting off from an underground alien base located deep beneath a mountain believed to be Glacier Peak in Washington State, UFO hunters claim.

According to an eyewitness report submitted by an unnamed witness on October 5, 2016, and filed as Case 79601 in the reporting database of the Mutual UFO Network (MUFON), the sighting of the alleged otherworldly craft occurred on September 9, 2016, at about 3:30 p.m.

“I did not see this ship with the naked eye–my camera caught the only image of it.”

The witness went out with his uncle to explore an old coal mining road in the remote Glacier Peak Wilderness in the state of Washington. He was photographing the wild scenery with his cell phone when the camera captured something strange.

According to the witness, while snapping multiple photos of the Skyline Ridge in a row, he did not notice anything unusual. But later, while reviewing the series of photos snapped in quick succession, he noticed that one contained a mysterious UFO craft, which he believed was an extraterrestrial craft or spaceship flying over a mountain, presumably Glacier Peak or Mount Baker.

“I was with my uncle in Glacier, Washington exploring up on an old coal mining road. Having never been up there before, I took my cell phone with me and was snapping photos of the scenery around me,” the witness reported to MUFON. “I was taking pictures of what I believe is Skyline Ridge, and I took several photos in a row. Only one contained what I believe to be a spaceship of some sort over the mountain to the right.” 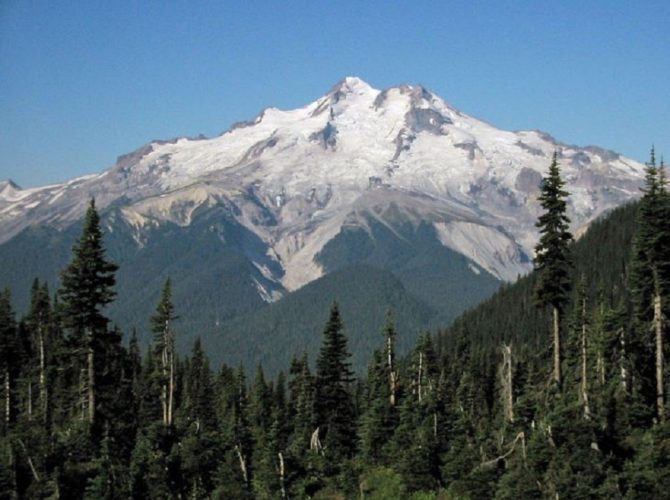 According to UFO blogger Scott C. Waring, the presence of the UFO in only one of the series of photos snapped in quick succession gives the impression that the UFO appeared out of thin air over the mountain. But as the veteran UFO hunter had pointed out in previous cases, the UFO may have appeared in only one photo because it was moving too fast to show in several photos of the same section of the sky taken in rapid succession.

Waring also noted that the UFO appeared to have divided into two sections or modules at the time it was captured on camera. But he assumed the modules were reuniting mid-flight when the witness snapped the photo.

“A UFO was seen over Glacier last week that appeared out of thin air over one of the mountain tops,” Waring commented on his UFO Sightings Daily blog. “The UFO does appear to be in two separate sections that probably unite when moving.”

The veteran alien hunter then suggested that the UFO may have emerged from an underground base with an entrance situated on top of the mountain over which it was photographed. Aliens obviously chose to locate the entrance to their deep underground UFO storage facility at the peak of a volcanic mountain in a remote wilderness because it is less accessible to humans.

The volcanic mountains, Glacier Peak and Mountain Baker, have an elevation of over 10,500 feet (3,200 meters).

The region of the north-western state of Washington where the mountains are located is ideal for alleged extraterrestrials to establish an underground base for their UFO spaceships. The isolation, extensive glaciation, and rugged terrain of the region make it very difficult to access by foot. Glacier Peak, in particular, is the fourth tallest in Washington state. Due to its remoteness, it is the least explored of the active volcanic peaks that form part of the so-called Cascade Volcanic Arc of the stage of Washington.

Based on the apparent massive size of the UFO shown in the photo, we may surmise that the alleged underground base consists of massive hangers from where alien spaceships take off on long, deep space voyages.

Alien hunters also concluded, based on the eyewitness’ statement that he did not notice the huge craft taking off from the mountain, that the UFO must have taken off silently and stealthily without audible engine sounds.

“This UFO probably came from an underground base, which has its entrance at the top of this mountain,” Waring stated. “The location would be almost inaccessible to most humans, making it the perfect location to come and go unseen by human eyes.” 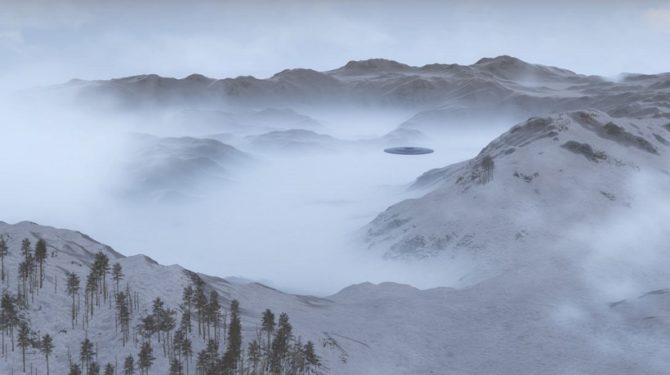 A UFO flies over mountainous terrain [Image by Ursatii/Shutterstock]

UFO enthusiasts on Waring’s UFO Sightings Daily were unanimous that the photo provides yet another corroborating evidence of extraterrestrial UFOs and their close association with volcanic mountains.

“There is so much evidence and so many images that are clearly of real craft that anybody who follows the subject knows the global population is being lied to and has been lied to for a very long time,” a UFO believer said.

“We`re at a kind of standoff now where the authorities know the public knows it`s real yet they continue to refuse to acknowledge it,” the UFO fan added. “How long can it continue?”

Reacting to Waring’s suggesting that the photo shows a UFO that separated into two modules mid-flight, an enthusiast suggested that what looks like a second module in the photo was, in fact, a reflection from the disc.

“I think it is not in two parts,” the enthusiast argued. “Looks like a reflection from the outer disc. If you inspect the picture closely you will see the Sun is behind the camera or to the right.”

According to conspiracy theorists, a large swathe of the Kangtega peak — also called the Snow Saddle — was blacked out on Google Earth to hide the entrance to a major underground UFO facility.

The alleged secret entrance, at coordinates 27°47’43.40″N 86°49’6.40″E, was first reported by the YouTube UFO hunter MexicoGeek on January 28, 2016. The area is considered to be a UFO hotspot where strange and mysterious UFO activity has been reported in the past.

Alien hunters engaged in debate with skeptics who argued that the blacked-out area on Google Maps was due to a glitch in the image.
[Featured Image by Ursatii/Shutterstock]