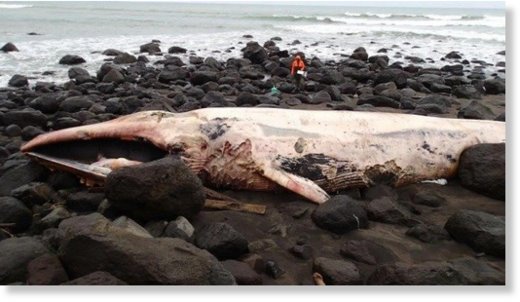 Our oceans are fast becoming a killing field for many marine mammals and other sea dwellers. Beachings are occurring with more frequency than ever. Mass fish kills are a common occurrence. Scientists are calling this the “Sixth Great Extinction Event”. Yet, few are correlating these changes to increases in energy and perturbations in the electromagnetic spectrum. Modern technology is having a profound impact on marine life, the likes of which hasn’t been witnessed by modern man.

In order to understand why our oceans are highly susceptible to electromagnetic radiation (EMR), it’s important to know the characteristics of EMR in water.

“Conductivity of seawater is typically around 4S/m, while nominally ‘fresh’ water conductivity is quite variable but typically in the mS/m range. Attenuation of em signals is much lower in fresh water than in seawater, but fresh water has a similar permittivity. Relative permeability is approximately 1, so there is little direct effect on the magnetic field component. Loss is largely due to the effect of conduction on the electric field component. Propagating waves continually cycle energy between the electric and magnetic fields; hence conduction leads to strong attenuation of electromagnetic propagating waves.” [Source]

Marine mammals are experiencing an onslaught of attack from many sources. The military admittedly kills millions of cetaceans by sonar, seismic, and electromagnetic technology. The estimated audible range for all cetaceans is between 7 Hz and 180 kHz.

“Unfortunately for many whales, dolphins and other marine life, the use of underwater sonar (short for sound navigation and ranging) can lead to injury and even death. Sonar systems—first developed by the U.S. Navy to detect enemy submarines—generate slow-rolling sound waves topping out at around 235 decibels; the world’s loudest rock bands top out at only 130. These sound waves can travel for hundreds of miles under water, and can retain an intensity of 140 decibels as far as 300 miles from their source.”

“These rolling walls of noise are no doubt too much for some marine wildlife. While little is known about any direct physiological effects of sonar waves on marine species, evidence shows that whales will swim hundreds of miles, rapidly change their depth (sometime leading to bleeding from the eyes and ears), and even beach themselves to get away from the sounds of sonar.”

Whales and other marine species use the Earth’s Geomagnetic Stress Lines (GSLs) to navigate/migrate. These GSLs correlate with the Earth’s magnetic field and are a natural occurring phenomena used by many species for this purpose. During geomagnetic storms, the GSLs may change drastically. These rapid changes are the primary cause of stranding and poor navigation.

“The beaching and stranding of whales and dolphins around the world has been mystifying scientists for centuries. Although many theories have been proposed, few are substantiated by unequivocal statistical evidence. Advances in the field of animal magnetoreception have established that many organisms, including cetaceans, have an internal ‘compass,’ which they use for orientation when traveling long distances.”

“Astrobiology involves not only the origin and distribution of life in the universe, but also the scientific study of how extraterrestrial conditions affect evolution of life on planet Earth. The focus of this study is how cetacean life is influenced by disturbances in its environment that originate from an astrological phenomenon – in the present study that involves solar flares and cetacean beachings. Solar storms are caused by major coronal eruptions on the Sun. Upon reaching Earth, they cause disturbances in Earth’s normally stable magnetosphere. Unable to follow an accurate magnetic bearing under such circumstances, cetaceans lose their compass reading while travelling and, depending on their juxtaposition and nearness to land, eventually beach themselves.

(1) This hypothesis was supported by six separate, independent surveys of beachings: (A) in the Mediterranean Sea, (B) the northern Gulf of Mexico, (C) the east and (D) west coasts of the USA and two surveys (E and F) from around the world. When the six surveys were pooled (1614 strandings), a highly significant correlation (R2 = 0.981) of when strandings occurred with when major geomagnetic disturbances in Earth’s magnetosphere occurred was consistent with this hypothesis.

(2) Whale and dolphin strandings in the northern Gulf of Mexico and the east coast of the USA were correlated (R2 = 0.919, R2 = 0.924) with the number of days before and after a geomagnetic storm.

(4) Annual beachings of cetaceans from 1998 to 2012 were linearly correlated (R2 = 0.751) with frequency of annual sunspot numbers. Thus, consistently strong statistical correlation evidence indicates that an astronomical phenomenon – solar flares – can cause cetaceans to change their behaviour and become disoriented, which eventually causes them to swim onto a shore and beach themselves.”

“Ionospheric heaters located in Polar Regions (EISCAT, HAARP, HIPAS) have been used extensively to generate electromagnetic waves in the ULF/VLF/ELF frequency range and this concept has been referred as the Polar Electrojet (PEJ) antenna. A major problem with the PEJ is its reliance in the presence and strength of the electrojet current. This restricts not only the location of the heater but makes their generation highly unpredictable. A new concept of using HF heating to generate a virtual antenna in the ionospheric Hall region at ULF/ELF frequencies without relying in the existence of electrojets, was advanced recently by Papdopoulos et al. (2010). The current drive and the creation of a virtual ELF antenna are accomplished in two steps. First, F region heating generates a diamagnetic current with a field aligned magnetic moment. Second, the electric field of the magnetosonic wave radiated by the F region magnetic moment drives a Hall current when it reaches the bottom of the ionosphere.”

In light of the roll out of 5G cellular technology and proposed wifi on board satellites, mankind will face serious consequences for our ignorance in utilizing unnatural vibrations. Nature took millions of years to establish what mankind has thrown into chaos in less than 100.

While we contemplate our need to advance technology and control of our EM spectrum, perhaps we should step back and examine the consequences of our actions. Our planet is suffering an ‘Extinction Level Event’. Do we have the will to stop it? Or will our children be the last to witness the breaching of a Humpback in Arctic waters?