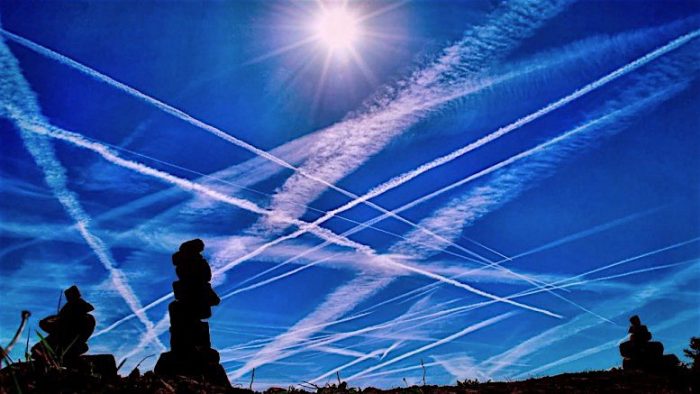 Three conspiracy theorists are vowing to blow the lid on what they believe is the biggest chemtrail bombshell of the century, after claiming to uncover alleged unclassified US Patents and Trademark Office (USPTO) documents.

While this is interesting, I’m not sure why this is such a bombshell. Some governments have admitted on some level or another that this IS being carried out. Granted they usually put it under many different guises such as: Solar Radiation management, Geoengineering, etc. However, their efforts should still be supported because we must keep this in the open and in the conversation. There is a lot more to what they (governments) are doing than the little that they admit to.

But ahead of that happening Mr Scott appeared in a YouTube livestream to share some of his extensive research.

The Planet X News YouTuber claimed to have found documents at the US Patent Office which prove jets are spraying the skies with chemicals.

But ahead of that happening Mr Scott appeared in a YouTube livestream to share some of his extensive research.

The Planet X News YouTuber claimed to have found documents at the US Patent Office which prove jets are spraying the skies with chemicals.

Purveyors of the chemtrail conspiracy theory believe US government agencies are responsible for spraying the skies with a variety of chemicals.

Some allege the government is attempting to control weather patterns and climate change, while other surmise the skies are being glazed over to hide the presence of alien bodies approaching Earth.

These conspiracies are often linked to HAARP, or the High Frequency Active Auroral Research Program, which many believe is a secret US scheme to weaponise weather.

Mr Scott said: “We’re about to come out with a very detailed, I think, groundbreaking book on chemtrails.

“Over the past couple of weeks I have unearthed some pretty damning information and I have all of it on PDF file.

“These are government files that have been unclassified.”

He added: “The files that I have uncovered and the PDF files that I was able to download, these are all coming from the US Patent Office.

“Some of the information has been redacted to get them but about 35 years ago several shadow companies – there is no link back to any government – have been working on aerosol pigmentation dispersant through aerosol components on jet aircraft.”

Mr Scott stressed his discovery of blueprints and a 30 page long document is “mind blowing”.

What appeared to be regular pictures of clouds in the skies, were interpreted by the conspiracist as evidence of “electromagnetic waves” used to control the weather and trigger earthquakes.

She said: “These are definitely waves. They are using electromagnetic frequencies to manipulate the whole atmosphere.

“It’s visible because we have clouds there but even when there are no clouds they are using these electromagnetic waves.

“The whole of the atmosphere is now bathed in these electromagnetic waves.

“That’s how they are controlling the weather. This is how they are creating earthquakes and today I even learned that they can create space weather at will.”

The US Patents Office said it was not possible to verify the claims.

A spokesman for the USPTO told Express.co.uk the claims cannot be verified without a patent number but the USPTO does at times handle Government documents.

“So, yes, there would be circumstances where the USPTO would handle applications under secrecy order and, or bearing national security markings.”

But despite the bizarre claims presented by the trio of conspiracists there appears to be no evidence to suggest aeroplane contrails are anything more than water vapour trails left behind by planes.

In fact the whole contrail conspiracy was debunked by numerous scientists studying the chemical composition of the atmosphere.

Ken Caldeira, an atmospheric scientist who published a study on this very contentious subject in the journal Environmental Research Letters, argued conspiracists ignore the empirical evidence presented to them.

He said: “I felt it was important to definitively show what real experts in contrails and aerosols think.

“We might not convince die-hard believers that their beloved secret spraying program is just a paranoid fantasy, but hopefully their friends will accept the facts.”

Steven Davis of UC Irvine who co-authored the study, added: “We wanted to establish a scientific record on the topic of secret atmospheric spraying programs for the benefit of those in the public who haven’t made up their minds.

“The experts we surveyed resoundingly rejected contrail photographs and test results as evidence of a large-scale atmospheric conspiracy.”