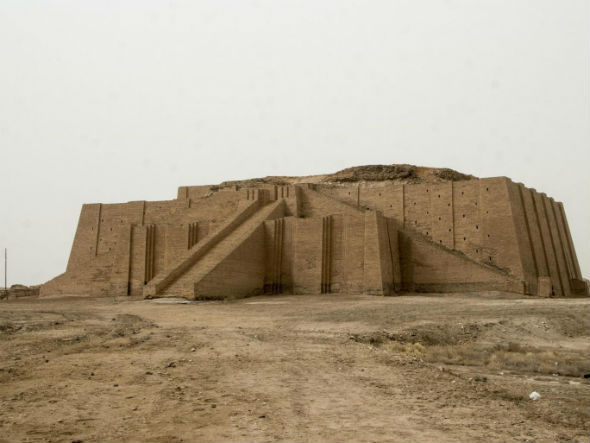 A SENIOR government minister has shockingly claimed that a fully-fledged space centre that launched crafts into our solar system was developed on Earth 7,000 years ago.

Kazem Finjan, Iraqi Minister for Transport, told a packed press conference the space station was developed in the El Naciria area in around 5,000 BC.

It was used as a launch site for spacecraft to explore our solar system and discovered mythical planet Nibiru, also known as Planet X, he said.

Mesopotamia, now in south Iraq, is largely seen as the birthplace of civilisation, but according to Mr Finjan, it was also the birthplace of space exploration and even saw an ancient mission which first identified dwarf planet Pluto, long before its official discovery in 1933.

The press had assembled to hear about a new airport in Dhi Qar, south Iraq, but according to news website The New Arab, Mr Finjan said “the world’s first airport was built 7,000 years ago in Iraq by ancient Sumerians”.

In keeping with the popular “Ancient Aliens” myth, Mr Finjan suggested the Sumerians were aided by sophisticated visitors from other worlds to develop the way ahead of its time space centre.

Mr Finjan is not alone in his theory that ancient spaceraft were regularly coming to and from Earth and meeting with our ancient ancestors.

The “Ancient Aliens” myth, which even has a long-running documentary series of the same name, centres around alien astronauts arriving on Earth to share their superior technology with ancient civilisations to help them build the fascinating monuments such as the Egyptian Pyramids.

The Sumerians settled in the historical region of Mesopotamia, now southern Iraq, from 5500 to 4000 BC, and created early civilisation, including agriculture, an economy and trades such as weaving, metalwork and pottery.

During the press conference, Mr Finjan referenced Russian professor and Sumerian expert Samuel Kramer, who spoke of their understanding of the solar system.

He told reporters: “The first airport that was established on planet earth was in this place.”

He also claimed “angels were all Sumerian” and “Sumerian spaceships used to launch from Earth to other planets”.

He said: “There are probably not many people who have knowledge, namely the fact that it was the first airport constructed 5,000 years before Christ.

“I invite those who doubt to read the book of the great Sumerian historian Zecharia Sitchin, or the books of Samuel Kramer including one entitled ‘History begins at sumer’ which speaks of the first airport constructed on planet earth, and it is there at el Naciria.

“The particularity of this place is that it remains the safest for the landing and takeoff of aircraft, due to favourable weather conditions. When the Sumerians settled on this land, they were aware of this and have chosen specifically for their flights to other planets.”

Mr Finjan, also claimed the ancient space travellers had discovered Nibiru, a fabled huge planet whose orbit is said to occasionally pass the Earth, causing havoc due to its gravitational pull.

His revelation was mocked on social media.

Dawood Al-Basri tweeted: “Iraqi transport minister’s hallucinations about spaceships in Nasiriyah proves that the [Haidar] Al-Abadi government is full of fools, hashish addicts and the most worthless of humanity.”

Iraqi Al Jazeera journalist, Amer Al-Kubaisi, wrote: “Can you believe that this imbecile is the current Iraqi transportation minister? I thank Allah for the blessing of a brain.”

Hayder al-Khoei, a researcher at the Centre for Academic Shi’a Studies, wrote: “Awkward moment and I don’t think anyone was brave enough to contradict him.”

But, some alien conspiracy theorists took him seriously as a whistleblower.

Scott C Waring, who runs www.ufosightingsdaily.com blogged: “It does seem that Sumairians did have ancient alien technology if you look at their stone carvings and depictions of flying machines. Perhaps he had inside information about it that he is now leaking.”

He is also not the first politician to make outlandish public statements about aliens.