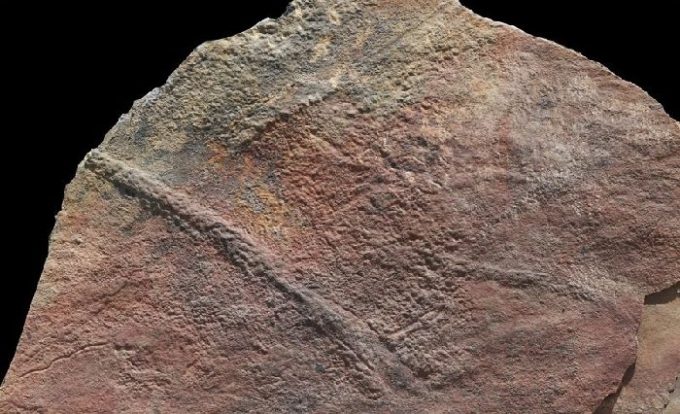 More than half a billion years ago, a strange, worm-like creature died as it crawled across the muddy sea floor. Both the organism and the trail it left lay undisturbed for so long that they fossilized. Now, they are helping to revise our understanding of when and how animals evolved.

The fossil, which formed some time between 551 million and 539 million years ago, in the Ediacaran period, joins a growing body of evidence that challenges the idea that animal life on Earth burst onto the scene in an event known as the Cambrian explosion, which began about 539 million years ago.

“It is just pushing things further and further back into the Ediacaran,” says Rachel Wood, a geoscientist at the University of Edinburgh, UK. The Cambrian explosion no longer appears to be such an abrupt event in the history of life on Earth, she says. An analysis of the fossil, along with a few dozen similar specimens found in the same rock sequence in southern China, is published in Nature1.

“What’s extraordinary about this paper is it’s three home runs in the same five-page manuscript,” says Simon Darroch, a palaeontologist at Vanderbilt University in Nashville, Tennessee. First, it’s exceptionally rare to find a dead animal preserved at the end of a trail it made when alive, he says. Second, the fossil dates to a crucial moment in the evolution of animal life.

And third: “It’s such a bizarre-looking organism,” says Darroch. The creature, which has been named Yilingia spiciformis and was up to 27 centimetres long, seems to be a biologically complex animal with a distinct front and rear end. “We don’t really have many of those from the Ediacaran,” he says.

The rock record has already revealed that the Ediacaran seas were rich in life, but many Ediacaran fossils have strange anatomical features that are unlike those seen in modern animals. Because of this, palaeontologists have struggled to relate the Ediacaran organisms to the creatures of the Cambrian period. This bolstered the idea that the Cambrian explosion represented the dramatic first appearance of familiar animals.

But opinions have begun to shift in the past few years. Some Ediacaran organisms have been recognized as animals despite their peculiar anatomy, which suggests that animal life began millions of years before the Cambrian explosion.

Yilingia spiciformis fits into that picture and pushes the idea further. With a segmented body that is symmetrical down its length, it has an anatomy that is more obviously similar to that of Cambrian animals, says Shuhai Xiao, a palaeontologist at Virginia Tech in Blacksburg and a co-author of the study. 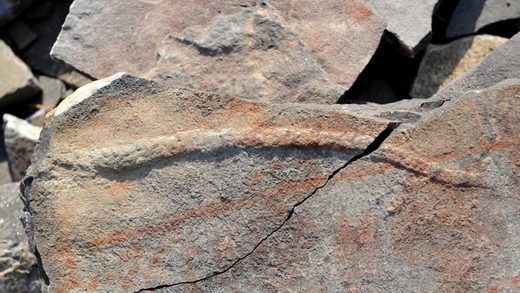 © Z. Chen et al./Nature
Like modern animals, Y. spiciformis had a distinct front and back end: the fossil tapers towards the rear.

What’s more, the trail demonstrates that Y. spiciformis could crawl over the sea floor like a modern animal. Palaeontologists have found only few pieces of evidence that the strange organisms of the Ediacaran were similarly mobile. Collectively, Xiao’s team’s findings mean that Y. spiciformis looked and behaved like a Cambrian animal — despite living up to 12 million years before what is usually considered the start of the Cambrian explosion.

“In the past, palaeontologists emphasized the differences between the Ediacaran and Cambrian,” says Xiao. “But when you think about it, life had to continue through the boundary. Some lineages had to survive.”

Exactly which animal lineage Y. spiciformis belonged to is unclear. The researchers suggest it might be a relative of insects and crustaceans such as shrimp and lobsters, because it seems to have leg-like structures. If further analysis shows that those structures are actually an artefact of the fossilization process, the animal might instead be some sort of primitive segmented worm.

“There’s a third possibility,” says Xiao: it could be an ancestor to both groups. The idea that segmented worms and shrimp-like creatures all evolved from a single group of segmented animals dates back to the nineteenth century, but it’s controversial because most researchers now think that shrimp-like animals are more closely related to nematode worms and other creatures that grow by shedding an exoskeleton.

Xiao thinks the evolution of segments could have been a key event in the history of animal life. Segmented animals might be able to evolve more or fewer segments without fatally disrupting their biology. So, he reasons, once a single group of segmented animals evolved, it might have had great potential to diversify into a whole range of lineages adapted to new niches, explaining why animal life flourished a few million years after Y. spiciformis appeared.

But Doug Erwin, a palaeobiologist at the Smithsonian National Museum of Natural History in Washington DC, isn’t convinced by the idea: he thinks segmentation probably arose several times in animal evolution. Partly as a consequence, he thinks Y. spiciformis could even belong to a completely different branch of the animal evolutionary tree, which has since gone extinct.