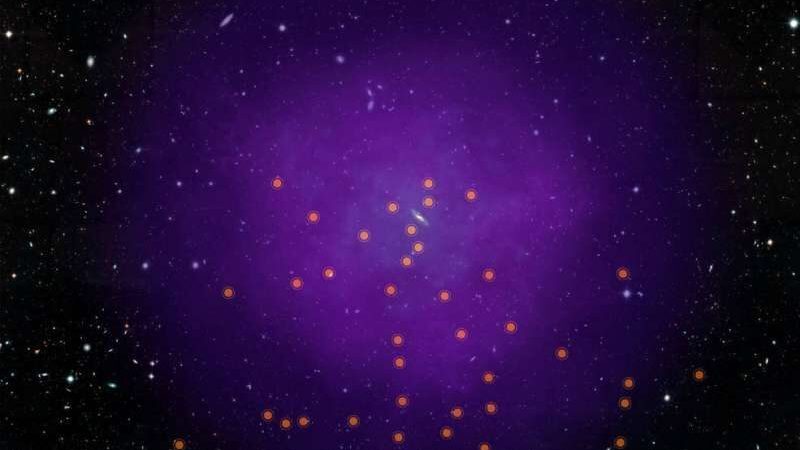 This headline image illustration shows the location of the 43 quasars scientists used to probe Andromeda’s gaseous halo. These quasars–the very distant, brilliant cores of active galaxies powered by black holes–are scattered far behind the halo, allowing scientists to probe multiple regions. Looking through the immense halo at the quasars’ light, the team observed how this light is absorbed by the halo and how that absorption changes in different regions. By tracing the absorption of light coming from the background quasars, scientists are able to probe the halo’s material.

In a landmark study, scientists using NASA’s Hubble Space Telescope have mapped the immense envelope of gas, called a halo, surrounding the Andromeda galaxy, our nearest large galactic neighbor. Scientists were surprised to find that this tenuous, nearly invisible halo of diffuse plasma extends 1.3 million light-years from the galaxy — about halfway to our Milky Way — and as far as 2 million light-years in some directions. This means that Andromeda’s halo is already bumping into the halo of our own galaxy.

They also found that the halo has a layered structure, with two main nested and distinct shells of gas. This is the most comprehensive study of a halo surrounding a galaxy.

“Understanding the huge halos of gas surrounding galaxies is immensely important,” explained co-investigator Samantha Berek of Yale University in New Haven, Connecticut. “This reservoir of gas contains fuel for future star formation within the galaxy, as well as outflows from events such as supernovae. It’s full of clues regarding the past and future evolution of the galaxy, and we’re finally able to study it in great detail in our closest galactic neighbor.”

“We find the inner shell that extends to about a half million light-years is far more complex and dynamic,” explained study leader Nicolas Lehner of the University of Notre Dame in Indiana. “The outer shell is smoother and hotter. This difference is a likely result from the impact of supernova activity in the galaxy’s disk more directly affecting the inner halo.”

A signature of this activity is the team’s discovery of a large amount of heavy elements in the gaseous halo of Andromeda. Heavier elements are cooked up in the interiors of stars and then ejected into space — sometimes violently as a star dies. The halo is then contaminated with this material from stellar explosions.

The Andromeda galaxy, also known as M31, is a majestic spiral of perhaps as many as 1 trillion stars and comparable in size to our Milky Way. At a distance of 2.5 million light-years, it is so close to us that the galaxy appears as a cigar-shaped smudge of light high in the autumn sky. If its gaseous halo could be viewed with the naked eye, it would be about three times the width of the Big Dipper. This would easily be the biggest feature on the nighttime sky.

Through a program called Project AMIGA (Absorption Map of Ionized Gas in Andromeda), the study examined the light from 43 quasars — the very distant, brilliant cores of active galaxies powered by black holes — located far beyond Andromeda. The quasars are scattered behind the halo, allowing scientists to probe multiple regions. Looking through the halo at the quasars’ light, the team observed how this light is absorbed by the Andromeda halo and how that absorption changes in different regions. The immense Andromeda halo is made of very rarified and ionized gas that doesn’t emit radiation that is easily detectable. Therefore, tracing the absorption of light coming from a background source is a better way to probe this material. 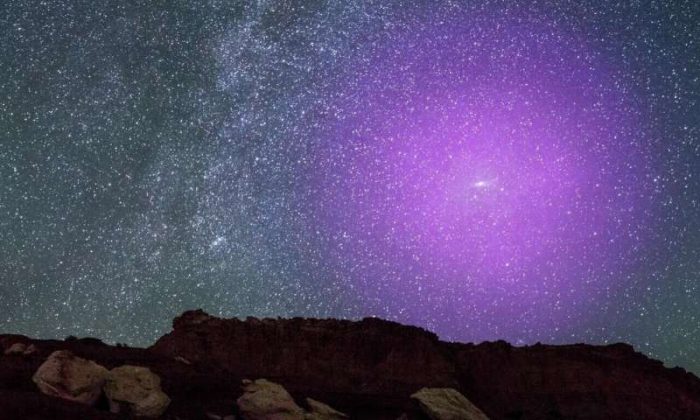 © NASA, ESA, J. DePasquale and E. Wheatley (STScI), and Z. Levay (background image)
This illustration depicts the gaseous halo of the Andromeda galaxy if it could be seen with the naked eye. At a distance of 2.5 million light-years, the majestic spiral Andromeda galaxy is so close to us that it appears as a cigar-shaped smudge of light high in the autumn sky. If its gaseous halo could be seen with the naked eye, it would be about three times the width of the Big Dipper—easily the biggest feature on the nighttime sky.

The researchers used the unique capability of Hubble’s Cosmic Origins Spectrograph (COS) to study the ultraviolet light from the quasars. Ultraviolet light is absorbed by Earth’s atmosphere, which makes it impossible to observe with ground-based telescopes. The team used COS to detect ionized gas from carbon, silicon, and oxygen. An atom becomes ionized when radiation strips one or more electrons from it.

Andromeda’s halo has been probed before by Lehner’s team. In 2015, they discovered that the Andromeda halo is large and massive. But there was little hint of its complexity; now, it’s mapped out in more detail, leading to its size and mass being far more accurately determined.

“Previously, there was very little information — only six quasars — within 1 million light-years of the galaxy. This new program provides much more information on this inner region of Andromeda’s halo,” explained co-investigator J. Christopher Howk, also of Notre Dame. “Probing gas within this radius is important, as it represents something of a gravitational sphere of influence for Andromeda.”

Because we live inside the Milky Way, scientists cannot easily interpret the signature of our own galaxy’s halo. However, they believe the halos of Andromeda and the Milky Way must be very similar since these two galaxies are quite similar. The two galaxies are on a collision course, and will merge to form a giant elliptical galaxy beginning about 4 billion years from now.

Scientists have studied gaseous halos of more distant galaxies, but those galaxies are much smaller on the sky, meaning the number of bright enough background quasars to probe their halo is usually only one per galaxy. Spatial information is therefore essentially lost. With its close proximity to Earth, the gaseous halo of Andromeda looms large on the sky, allowing for a far more extensive sampling.

“This is truly a unique experiment because only with Andromeda do we have information on its halo along not only one or two sightlines, but over 40,” explained Lehner. “This is groundbreaking for capturing the complexity of a galaxy halo beyond our own Milky Way.”

In fact, Andromeda is the only galaxy in the universe for which this experiment can be done now, and only with Hubble. Only with an ultraviolet-sensitive future space telescope will scientists be able to routinely undertake this type of experiment beyond the approximately 30 galaxies comprising the Local Group.

“So Project AMIGA has also given us a glimpse of the future,” said Lehner.

The team’s findings appear in the Aug. 27 edition of The Astrophysical Journal.