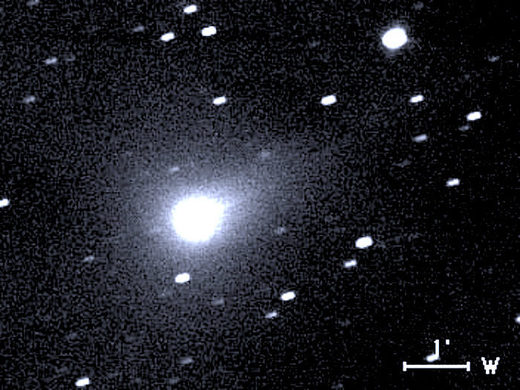 It might be streaming by on April Fools’ Day, but this comet is no holiday prank.

On Saturday, the inelegantly named comet 41P/Tuttle-Giacobini-Kresák will make its closest flyby of Earth since its discovery in 1858.

There’s no need to worry about it hitting Earth: The comet will zoom past at a safe distance of around 13.2 million miles, about 50 times the moon’s distance, EarthSky.org reports.

While the comet will be closest Saturday, you can get a peek in the days before and after. “Amateur astronomers with small telescopes are already watching, and more people will see the comet in the coming days,” EarthSky.org said.

Clouds may obscure the sight for much of the Northeast, the central Plains and Pacific Northwest on Saturday night, but much of the rest of the country should be clear, the National Weather Service predicts. 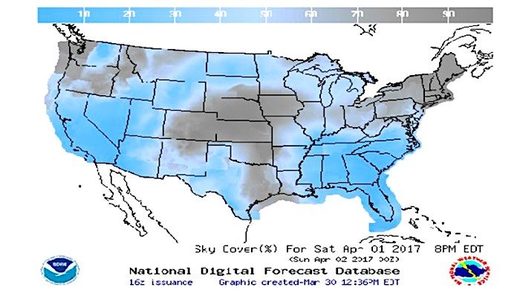 The predicted cloud cover across the U.S. at 8 p.m. ET on Saturday, April 1, 2017. Clear skies are blue and cloudy skies are gray. (Photo: National Weather Service)

The comet is not particularly large — less than a mile in diameter — and can’t be seen with the naked eye, reports Science Alert. “Usually it appears in the night sky as a diffuse blob of light,” the site said. “Good binoculars or small telescopes will be needed to pick it out, as well as a dark, clear, moonless night.”

Fortunately, the thin crescent moon won’t hinder skywatchers as it will sink in the western sky after sunset Saturday, NASA said.

If you can’t see the comet, you might want to travel over to astronomy website Slooh.com, which will be tracking the comet live via its telescopes in the Canary Islands.

This comet “belongs to a group of comets know as ‘Jupiter comets’,” according to Slooh.com. “These are comets that have been captured by the gravity of Jupiter, forcing them in an orbit that takes them between the sun and the gas giant,” Slooh.com said.

41P/Tuttle-Giacobini-Kresák swings by the Earth every 5 and a half years.