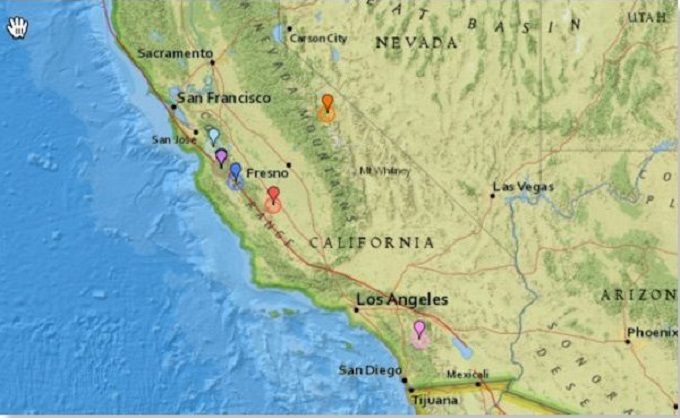 Are Tiny Tremblors on the West Coast a Signal of a Coming Major Earthquake?

We did have an 8.0 earthuake but it was in Peru, most likely totally unrelated though.

via The Charlotte Observer:

Or experts say they might just be another reminder that the pressure’s always building on fault lines beneath the West Coast, KATU reported.

“Those are just reminders,” said Scott Burns, a Portland State University geology professor, according to the station. “We don’t know what they mean. They are reminders that we are in earthquake country, and they may be precursors to the ‘big one.'”

The tremors are indications of a “slow-slip” event, says Ken Creager, a University of Washington professor, KOMO reported.

In a slow-slip movement, which takes place every 14 months or so, a tectonic plate temporarily moves backward, causing a series of small quakes, KOIN reported.

Most of the tiny temblors in a slow-slip event are below 3.0 magnitude and undetectable by most people, said John Vidale, director of the Pacific Northwest Seismic Network, reported the Seattle Post-Intelligencer.

“These plates are basically moving half an inch over the course of a couple days, so it kind of jiggles enough that our most sensitive instruments can feel,” Vidale said, according to the publication. “But people can’t.”

Nevertheless, Burns says slow-slip events are a good reminder to people to be prepared for a disastrous earthquake, KOIN reported.

Burns said the “big one” would shake for nearly four minutes and cause “extensive damage,” according to KOIN.