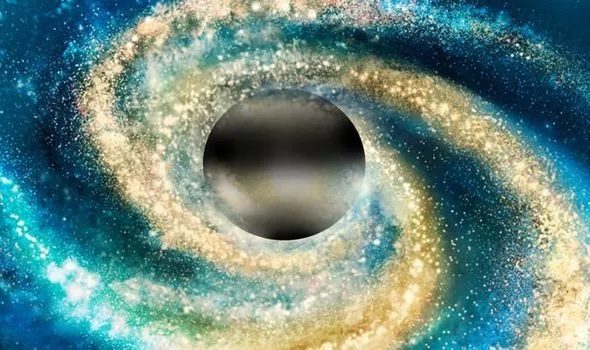 Are We lnside a Massive Higher Dimensional Black Hole?

THE Big Bang and black holes share an incredible trait: the singularity. Experimental scientists are consequently now speculating the entire universe in fact exists beyond the event horizon of a huge higher dimensional black hole that has existed since the beginning of time.

The latest research estimates the observable universe is home to 200 billion galaxies distributed at a wide variety of distances. The more distant a galaxy is, the faster it seems to be receding from us, as the fabric of space itself expands. This means as time goes on, matter continues to spread-out and become less dense, as the Universe’s volume balloons.

It also means that, looking to the past, the Universe shrinks down to a singularity, a cosmological model known as the Big Bang theory.

Now a team of radical astrophysicists from Canada’s University of Waterloo have proposed replacing the Big Bang with a different sort singularity – a black hole.

A black hole is a region of space time exhibiting such powerful gravitational acceleration that nothing – even light — can escape.

At a black hole’s centre is a gravitational singularity, a one-dimensional point which contains an incomprehensibly enormous mass in an infinitely small space.

Big Bang singularity: Could the universe really be sitting at the centre of a black hole? (Image: Getty)

Density and gravity become infinite in a singularity and space-time curves infinitely, meaning the laws of physics as we understand them cease to function.

But although black holes and the Big Bang share singularities, there is an important difference between them.

The Universe is protected from the chaos of a black hole’s singularity by its event horizon, the cosmic watershed from which nothing can ever escape.

Robert Mann, professor of physics and applied mathematics told Express.co.uk why he and his team have proposed we are living in a four-dimensional black hole, formed by the collapse of a five-dimensional star.

He said: “This was an idea that came up around four years ago with Niayesh Afshordi, another professor at Waterloo.

“The idea was in some sense motivated by trying to unify the notion of singularity, or what is incompleteness in general relativity between black holes and cosmology.”

“And so out of that came the idea that the Big Bang would be analogous to the formation of a black hole, but kind of in reverse.” 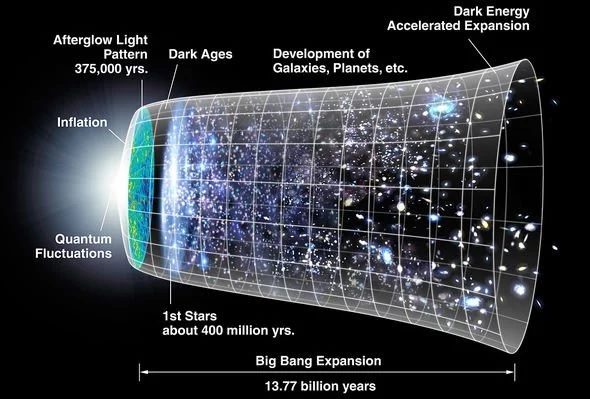 Big Bang singularity: A timeline of the standard model of the metric expansion of space (Image: Wikimedia)

Part of the University of Waterloo’s motivation for the theory was to come up with alternative ideas to standard pictures in cosmology, having to do with inflation.

“There in the process be an explosion of a membrane of matter and that our universe was this membrane, so to speak.

“And this idea was the alternative to the inflationary universe scenario, which is the most common one.”

This means our three-dimensional world is just a “membrane” in a much larger four-dimensional universe, they argue, using the cutting-edge terminology of string theory.

He continued: “Instead of our universe experiencing a period of rapid expansion and comic inflation, the universe’s structure was dictated by gravitational collapse properties in higher dimensions.

“So it is a bit of an unconventional idea but it is one that cannot obviously be ruled out, so we decided to explore it.”

Importantly, for the point of view of theoretical science, the astrophysicists’ proposal makes predictions capable of being tested.

One of those is that there should be fluctuations in the cosmic microwave background radiation, the echo of the big bang.

This, however, has yet to be detected in the latest data from the European Space Agency’s Planck Observatory.