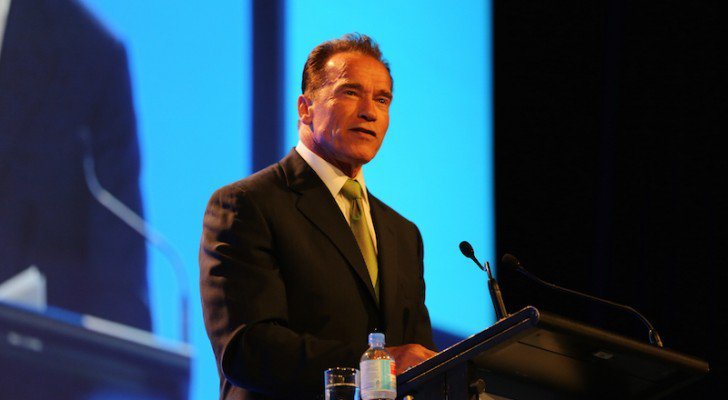 Arnold Schwarzenegger: Terminate Eating Meat to Help Save The Planet?

Like him, hate him, or love him, big Arnold Schwarzenegger, the once Hummer driving Governor of California, was interviewed by the BBC at the UN Climate Conference in Paris a few days ago. Arnold added his voice to the growing list of high profile celebrities who are promoting the benefits of a vegetarian diet in an effort to help reduce our impact on the planetary systems. Arnold suggests it is a “good idea” for people to stop eating meat altogether or, at the very least, to stop for one or two days a week. “Luckily, we know you can get protein in many different ways,” Schwarzenegger states in the BBC interview. He also points out that a good portion of greenhouses gases are produced by intensive farming of livestock. Schwarzenegger, who started his career as  a bodybuilder, winning the Mr. Universe title at the age of twenty and going on to win the Mr. Olympia contest seven times, has inspired many young males for decades. Schwarzenegger makes a good point that it is difficult to get people to change habits immediately, hence, it is possibly a better strategy for people to reduce consumption in the first instance in an effort to move toward a more vegetarian/vegan diet.

Last year, the UN Food and Agricultural Organisation released a report that claimed emissions from farming, forestry, and fisheries had nearly doubled over the past half-century and may increase another 30 per cent by 2050. In line with this trend of a growing awareness and the impact humans are having on the planet, there is increasing discussion around the efficiencies of our agricultural systems. According to ecologists David Tilman from the University of Minnesota and Matthew Clark, “rising incomes and urbanisation have changed the global diet which has become high in refined sugars, refined fats, oils and meats.” The Tilman and Clark study published in the journal Nature showed that, by 2050, these dietary trends will be a major contributor to an estimated 80 per cent increase in global agricultural greenhouse gas.

One Billion Hectares of Natural Habitat Could be Destroyed For Livestock

If the current Western diet continues to influence eating habits (high meat and processed food consumption), it is envisaged a further billion hectares of natural habitat will be destroyed to provide the land needed for food production and agriculture. The study analysed data on environmental costs of food production, diet trends, relationships between diet and health, and population growth. Between 1961 and 2009, the pair discovered consumption of meat and calories per person rose in tandem with income. Combining this with forecasts of population and income growth for the coming decades, the researchers showed diets in 2050 would contain fewer servings of fruits and vegetables, but 25 to 50 percent more pork, poultry, beef, dairy, and eggs. The study also used a computer model to see how changing from an omnivore diet to a typical Mediterranean, pescatarian, or vegetarian alternative could make a significant difference. The study’s findings showed eating less meat is essential to ensure future demand for food can be met and dangerous climate change avoided. This study has also been supported by research from the University of Cambridge and University of Aberdeen, which did similar studies. This dietary shift would prevent the destruction of an area of tropical forests and savannas as large as half of the United States. (1)

The Dramatic Increase in Diet-related Disease

A study published by the Proceedings of the National Academy of Sciences in 2013 found that, as global food diversity declines and the consumption of meat and processed foods increases, the direct result is a dramatic increase in diet-related disease. Spiraling incidents of diabetes, heart disease, and cancer are highly correlated to Western diets heavy in meats and dairy. “Such diseases,” the study says, “are becoming epidemics.” The study notes that it is “a shared axiom” of ecology and nutrition that diversity enhances health. (2)

There are over 30,000 known edible plants, yet just fifty crops deliver 90% of the world’s calories. The opportunities for a more diverse mix of edibles in our diets offer significant prospects for establishing new food systems which deliver greater variety and higher nutritional value. Greater diversity in food production will bring greater resilience to food systems as well as delivering new and exciting opportunities. Under a localised model of food production, other opportunities will arise as will businesses which support the functioning of healthy local economies.

Ultimately a vegetarian diet would significantly address some of the energy issues we face. It would also help solve some of the broader issues of deforestation, climate change, water consumption, and pollution. Switching to a plant-based diet is possibly the single most important thing an individual can do to minimise use of resources and benefit the overall environment.(3)