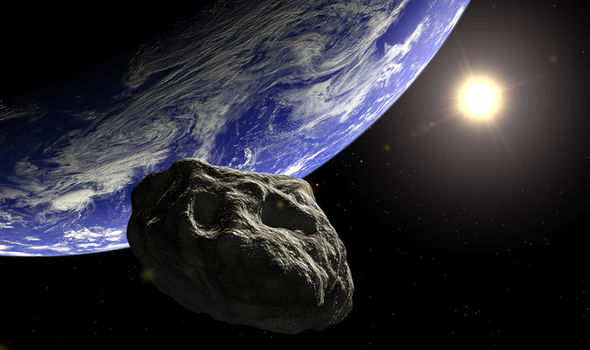 Asteroid 2012 TC4 Could Collide With Our Moon

A NEW tracker of the asteroid which is set to whizz past Earth on October 12 shows just how close it could come to a collision with the moon.

Asteroid 2012 TC4 will shoot past Earth on October 12 at a distance of just 31,000 miles – around an eighth of the distance between the Earth and the moon.

However, the asteroid is so close to Earth that the gravitational pull of our planet will have an effect on the space rock’s trajectory.

An animated tracker from the website EarthSky shows that as the asteroid safely passes by Earth, it will shoot slightly upwards.

However, coming in from the opposite direction is the moon and 2012 TC4 and our lunar satellite could come perilously close to crashing if the Earth exerts more of a tug on the asteroid than experts anticipate.

But scientists are confident that the asteroid which is believe to be between 10 and 30 metres in size poses no threat to the moon or life on Earth.

However, NASA will use the extremely close fly by to gather valuable data on the space rock.

Michael Kelley, program scientist and NASA Headquarters lead for the TC4 observation campaign, said: “Scientists have always appreciated knowing when an asteroid will make a close approach to and safely pass the Earth because they can make preparations to collect data to characterise and learn as much as possible about it.

“This time we are adding in another layer of effort, using this asteroid flyby to test the worldwide asteroid detection and tracking network, assessing our capability to work together in response to finding a potential real asteroid threat.”

At between 10 and 30 metres in size, it is believed to be bigger than the Chelyabinsk meteor which exploded above Russia, damaging thousands of buildings and injuring 1,500 people in 2013.