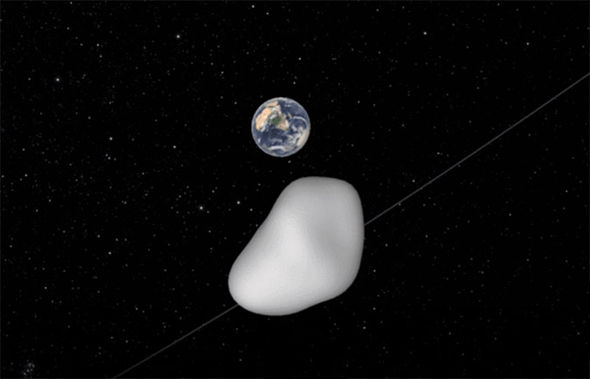 AN ASTEROID currently beyond the range of telescopes is heading towards Earth, with NASA claiming it gives their scientists a chance to test its space threat-scanning ability.

The scientists said they are “excited” by the asteroid, which could be as large as 100 feet in size.

It is expected to fly past Earth on October 12, and while NASA said it is “absolutely certain” the rock will miss the planet, they are unsure how close it will pass.

They said the rock will not come within 4,200 miles from the surface of the Earth but cannot be more specific as it has been out of the range of telescopes since 2012.

They said the asteroid, known as 2012 TC4, will improve their ability to locate future threats to Earth as it passes by the planet.

NASA’s Jet Propulsion Laboratory (JPL) explained: “NASA scientists are excited about the upcoming close flyby of a small asteroid and plan to use its upcoming October close approach to Earth as an opportunity not only for science, but to test NASA’s network of observatories and scientists who work with planetary defence.”

Michael Kelley, who is leading the observation campaign, said NASA were using the flyby as a “test”.

He said: “Scientists have always appreciated knowing when an asteroid will make a close approach to and safely pass the Earth because they can make preparations to collect data to characterise and learn as much as possible about it.

“This time we are adding in another layer of effort, using this asteroid flyby to test the worldwide asteroid detection and tracking network, assessing our capability to work together in response to finding a potential real asteroid threat.”

The asteroid first passed Earth in 2012 before disappearing into the Solar System beyond the range of telescopes.

Since then NASA has been anticipating its return, which will occur in October.

The asteroid is currently beyond the range of telescopes on Earth

Paul Chodas of JPL said: “This is the perfect target for such an exercise because while we know the orbit of 2012 TC4 well enough to be absolutely certain it will not impact Earth, we haven’t established its exact path just yet.

“It will be incumbent upon the observatories to get a fix on the asteroid as it approaches, and work together to obtain follow-up observations than make more refined asteroid orbit determinations possible.”