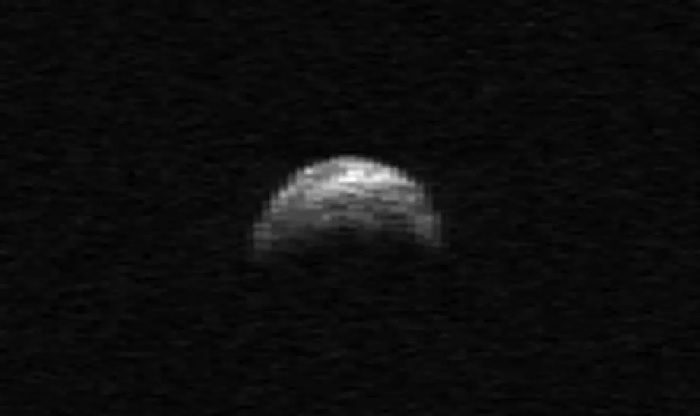 As it leaves safely (hopefully) after the visit in March, if we listen carefully we might just hear, “I’ll be back”.

By Nate Schwartz
via deseret

Asteroid 99942, a cosmic rock roughly the size of the Golden Gate Bridge, will zoom past Earth on March 21.

Scientists first spotted the asteroid, aptly nicknamed Apophis after the Egyptian god of chaos, as it was in our cosmic neighborhood in 2004, Space.com reports.

According to the site, Apophis is precisely the type of space object that pedestrians would want to know about as it is huge (about a half-mile to 1 mile in diameter, according to Live Science) and, on occasion, it gets uncomfortably close to Earth.

While Apophis will glide past Earth from the safe distance of 1.25 million miles (around 40 times the distance between Earth and the moon) next month, its return in April 2029 will be much, much closer. Space.com reports that on April 13, 2029, the asteroid will skim so close to Earth that it will pass through our planet’s realm of high-altitude satellites, which NASA reports to be a distance of approximately 19,800 miles.

It’s an extremely rare occasion when a foreign object of such stature comes in close proximity to Earth.

“This (is) something that occurs about once every 1,000 years,” Marina Brozović, a radar scientist at NASA’s Jet Propulsion Laboratory in California said (via Space.com). “So obviously, it is generating a lot of interest.”

NASA reports that Apophis will be visible to the naked eye when it returns in 2029 and onlookers in the southern hemisphere, primarily Australia, will see the asteroid as a speck of light moving from east to west across the night sky.

As the rock flies past the Earth, it will be traveling at a staggering speed of 76,980 miles per hour, Newsweek reports. For reference, that’s roughly 100 times faster than the speed of sound and about one-third of the speed that a bolt of lightning travels.

There are no known asteroids that pose any significant risk to Earth for the next 100 years, Live Science reports. According to the site, the largest known threat today is an asteroid called (410777) 2009 FD, which has less than 0.2% chance of striking Earth in 2185.

In the meantime, NASA is studying ways to deflect future asteroids that are on a collision course with Earth, Live Science reports. Scientists have discussed using the gravity of a spacecraft to slowly tug asteroids out of dangerous trajectories and into safer ones.