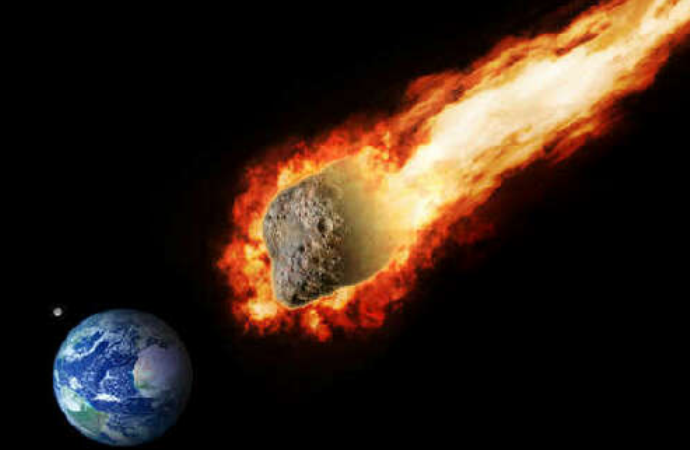 Our planet could be in danger of an unexpected asteroid that is hurtling toward the Earth. The asteroid will pass by the Earth dangerously close.

Astronomers were oblivious to the existence of the space rock, which is big enough to destroy a town and called 2015 YB, until Wednesday.

The Slooh Telescope internet channel is hosting a special live broadcast to capture the flyby at 2am.

A Slooh spokesman said the pass was so near it would be within range of geosynchronous satellites which orbit at the same rotation period as Earth.

“The size and speed of this asteroid makes it very difficult to track.

“During our live broadcast, host Paul Cox and Slooh Astronomer Bob Berman will discuss why it is so difficult to track these fast moving objects, and of course, the kind of damage a (it) would cause were it to impact Earth, and why.”

It may sound far, but the estimated 34,672 miles away pass, its a cat’s whisker in cosmic terms, and is less than a fifth of the 238,000 miles between earth and the moon.

The asteroid is only 20 metres in length, but an asteroid of the same size exploded suddenly in Earth’s atmosphere above Chelyabinsk, Russia, in February 2013 – injuring 1,500 people.

If an asteroid of 50 metres hit London it could destroy the city.

Astronomers have nicknamed the asteroid The Flea, in honour of the world’s greatest soccer player, Lionel Messi.

The spokesman added: “We will be asking, why, like Messi, it got through our best defenses until two days ago.”

It is the second recent near Earth asteroid to turn up out of the blue.