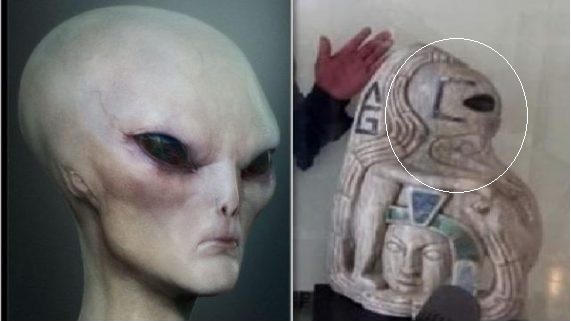 So many statues, carvings, paintings and artifacts from the Mayans depict what appear to be aliens or alien spaceships, it’s hard to argue that all of them either have logical non-ET explanations or are hoaxes. Another such statue was unveiled recently by the museum of Xiutetelco, in Puebla, Mexico. Announcements of its discovery refer to it as an “alien figure” and “controversial.” What is it?

According to El Sol de Puebla, the statue was uncovered by municipal workers in the small town of Maxtaloya. After careful cleaning, archeologists identified inlays of obsidian, turquoise, jade and shell. But the main and mysterious attraction of the statue is its humanoid figuration. It’s surrounded by a snake and holding or sitting on a human head. The obvious reasons it is described as “alien” are the large, odd-shaped head and the oval eyes that are often seen in depictions of aliens such as the Greys.

Rafael Julián Montiel, the director of the museum, anticipates finding more artifacts in the area because of its close proximity to Cantona (La casa del sol), the largest pre-Columbian city discovered so far in Mesoamerica whose own spectacular Mayan historical architecture and relics have barely been excavated – experts estimate over 90% of Cantona is still to be found. While care must obviously be taken in uncovering the Mayan city, there is a dual sense of urgency due to looting and the nearby volcanoes which are always a threat to erupt. 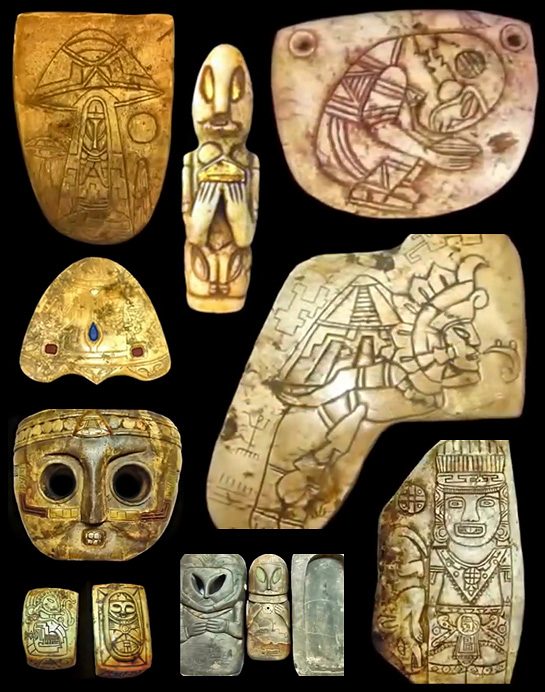 According to Montiel, the Maxtaloya statue is one of over 5,000 various artifacts discovered in the Maxtaloya area. As they are found, they’re taken to the museum in Xiutetelco for care and exhibition. The “alien” statue was obviously unusual enough and authentic enough to warrant a special announcement of its discovery.

As with many similar Mayan artifacts, the statue has traits that can be explained culturally. The snake or serpent could be a depiction of the Quetzalcoatl, the feathered serpent diety and god of wind and learning. Serpents were also used to symbolize the underworld, which could explain why the detached human head seems to be being used as a stool by the almond-eyed creature. Those eyes and that elongated head appear in other Mayan relics. While they could be a symbol that the creature is an underworld demon or deity, they’re also the main reason for the belief that the Mayans were visited by aliens or ancient astronauts or were aliens themselves.

What are these artifacts depicting?

That belief has spawned many theories and many fake artifacts, making it difficult to determine the truth. Montiel assures that this statue is definitely an ancient Mayan piece.

What it depicts is still a mystery, but it’s obvious from the local media coverage that “alien” is one of the top choices.