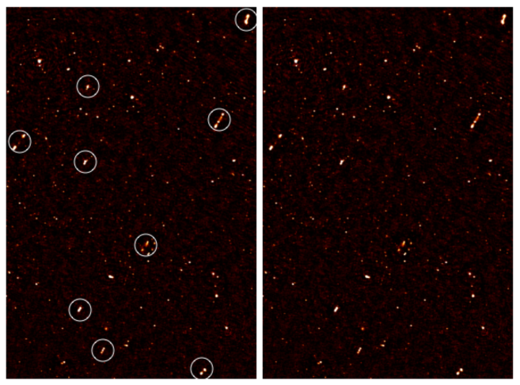 Astronomical Mystery: Why are the Jets of These Super Massive Black Holes Aligned?

Headline image caption: A deep radio map covering the ELAIS-N1 region with aligned galaxy jets circled in white in the image on the left.

Jets blasting from 64 supermassive black holes in a distant patch of the Universe appear to be lined up, like needles on compasses

In a distant patch of the Universe has emerged a mysterious phenomenon: the jets blasting from the centre of 64 supermassive black holes in galaxies are all aligned.

Three years of radio images snapped by the Giant Metrewave Radio Telescope in India and analysed by a pair of astronomers in South Africa picked up the faint signatures of jets pointing in the same direction like compass needles, and may give clues about the structure of the primordial Universe when the black holes formed.

“Since these black holes don’t know about each other, or have any way of exchanging information or influencing each other directly over such vast scales, this spin alignment must have occurred during the formation of the galaxies in the early Universe,” says study co-author Russ Taylor from the University of the Western Cape.

The aligned jets were found in the European Large-Area ISO Survey-North 1 (ELAIS-N1) region of the sky and published in the Monthly Notices of the Royal Academy of Sciences.

When Taylor and co-author Preshanth Jagannathan, who was at the University of Cape Town at the time but is now at the National Radio Astronomy Observatory in New Mexico, US, spotted the aligned jets, they calculated the odds of chance alignment to be less than 0.1%. So what was going on?

The direction of a jet, they write, is determined by the angular momentum axis of the spinning supermassive black hole powering it.

Given a whole bunch of jets are aligned in ELAIS-N1, it follows that their black holes are spinning with the same angular momentum too – so something must’ve set them going when the Universe was young and the black holes forming.

There are a few ways this may have happened. A massive cosmic magnetic field, exotic particles or cosmic strings – theoretical “fault lines” in the Universe – may have set the black holes spinning the same way. Or something else entirely – Taylor and Jagannathan don’t know.

More imaging projects are in the pipeline to examine even fainter galaxies in ELAIS-N1, using the Australian SKA Pathfinder and South African MeerKAT array, and eventually, the Square Kilometre Array (SKA), which is scheduled for construction in Western Australia and South Africa.

“[The Giant Metrewave Radio Telescope] is one of the largest and most sensitive radio telescope arrays in the world, but we really need MeerKAT to make the very sensitive maps, over a very large area and with great detail, that will be necessary to differentiate between possible explanations,” Taylor says.

“It opens up a whole new research area for these instruments, which will probe as deeply into the [past] and as far back as we can go.”