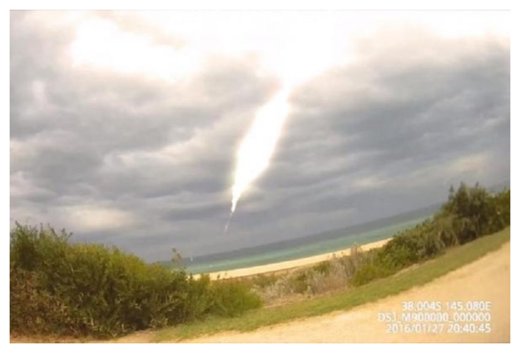 Australian Catches Close-Up Footage of Meteor Fireball – Be Ready For That Crazy BOOM!!

Melbourne — A man testing out his body camera at a Victoria, Australia, beach captured video of a suspected meteor falling to earth nearby.

The video, posted to YouTube (see below) by Overwatch Security, features body camera footage filmed by a worker for the firm as he walked on a Victoria beach on a stormy day.

The lights are quickly followed by the sound of the object passing through the air toward the water.

The video’s time-stamp indicates it was filmed just after 8 p.m. Jan. 27.

“While testing one of our Body Cameras on a stormy day a meteor hit the bay directly in front of me just as I sat down. The sound was insanely loud but only lasted for a second or two. Scary stuff, I was literally lost for words. Hopefully no boats were hit!” the man wrote in the video’s description.