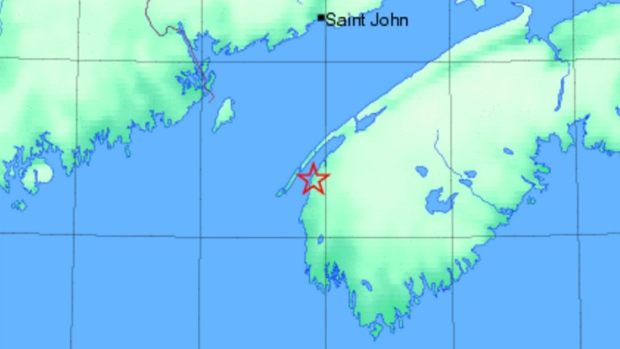 If you were in southwest Nova Scotia on Tuesday you may have felt the earth move.

At 10:40 a.m., a 3.0-magnitude earthquake was recorded about 42 kilometres southwest of Digby, according to Natural Resources Canada. The centre of the quake was about 18 kilometres below the earth’s surface.

“I heard a very loud bang, just a big boom and then it was over,” she said of the “shiver” she felt in her house.

“It wasn’t anything to be a afraid of or think, ‘Oh my, it’s the end of the world,’ nothing like that. It was just a big boom and then it was over.”

Donna Gaudet was at her cousin’s basement in Little Brook, N.S., a few kilometres from the epicentre, enjoying a coffee.

“We went flying up the stairs. If it wasn’t an earthquake, we thought maybe a plane crashed. It was loud, it was louder than thunder,” she said. “It wasn’t really that exciting once the initial impact happened.”

This isn’t the first time an earthquake has been felt in the area. In 2015, a 3.6-magnitude earthquake rumbled through southwest Nova Scotia on Canada Day.

There was also another earlier this year — one 3.0 in magnitude located about 19 kilometres north of Yarmouth.

Small said during that quake, which was closer to the surface, “the house really shook”.

“It was enough to take pictures and turn them sideways. That one last two or three seconds and that one was kind of half scary.”

Alan Ruffman, president of Geomarine Associates Ltd. and an honourary research associate at Dalhousie’s department of earth sciences, said in a 2015 interview that Atlantic Canada tends to be hit by waves of small quakes every few decades, and that can ultimately lead to a big quake.

The last time multiple earthquakes really shook homes in the Maritimes was at end of the 1800s, he said.