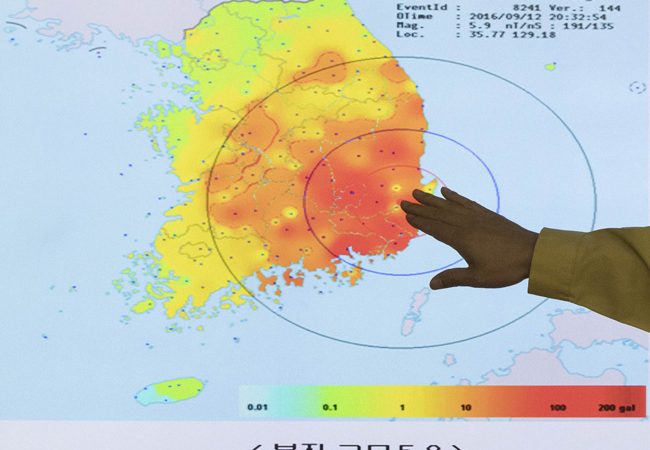 The Korea Meteorological Administration (KMA) put the second tremor higher than USGS, at 5.8-magnitude, describing it as the “biggest ever”.

“It was the biggest quake ever to hit the country,” Yoo Yong-Gyu, a KMA official, told reporters, adding the tremor was “felt all across the country”.

The previous record in the South was a 5.2-magnitude quake that hit the sea off the southeastern port of Uljin in 2004 and a quake of equal magnitude in the eastern mountainous region of Sokri in 1978.

Monday’s second quake hit at around 8:30 pm (1130 GMT), with the epicentre near the southeastern city of Gyeongju, the KMA said.

On Friday USGS reported a 5.3-magnitude “artificial earthquake” in North Korea, that was in fact a nuclear test.

Emergency centres across the South were flooded by tens of thousands of calls seeking information, Yonhap news agency said, adding train services in some regions were temporarily delayed.

The country’s largest mobile app used by 40 million — KakaoTalk — partially went down with many unable to access the service, the company said, apparently due to heavy traffic.

The country’s social media was also flooded with images of shattered storefront windows and people rushing out of buildings and apartments in panic, some with children in arms.

TV stations showed video footage of computers violently shaking at a local Internet cafe, students rushing out of schools, and products falling off shelves at a store.