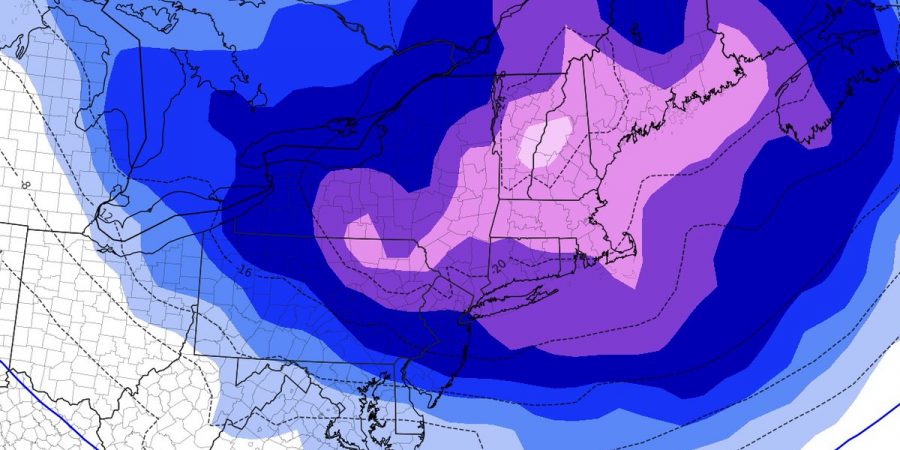 Another blast of cold air will bring one of the coldest Thanksgivings on record for some Northeast cities.

A strong area of high pressure originating from the Arctic Circle is now sweeping into the Northeast, and will send temperatures plummeting toward levels you might expect on New Year’s Day, not Thanksgiving Day. 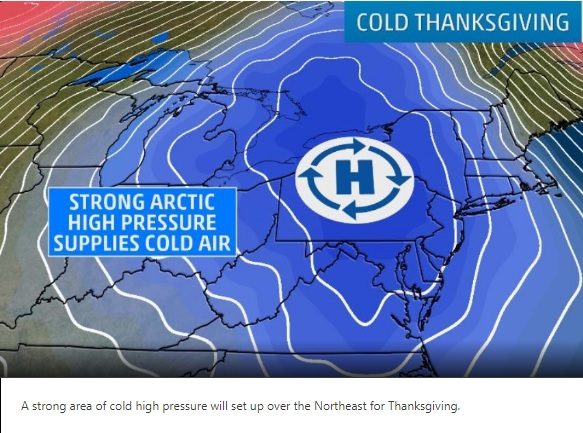 These will be the coldest temperature anomalies – in other words, the temperatures most below average – anywhere in the Northern Hemisphere on Thanksgiving Day.

For some Northeast cities, high temperatures on Thanksgiving could be close to the coldest on record no matter what day of the month the holiday was celebrated (e.g. Nov. 22, Nov. 24, Nov. 26, etc.).

New York City has only had three Thanksgivings dating to 1870 when the high temperature failed to rise out of the 20s, according to National Weather Service statistics. The coldest was a high of 22 degrees on Nov. 30, 1871.

Forecast highs Thursday in New York City likely will not rise out of the 20s for the first time on Thanksgiving since 1901. 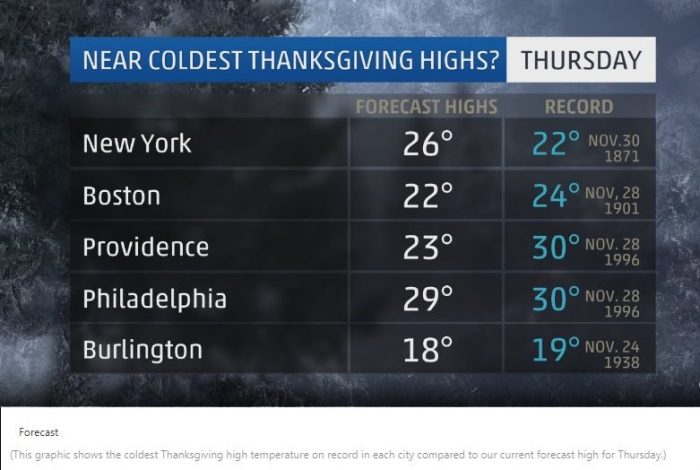 Low temperatures Thanksgiving morning and Black Friday will be 15 to 30 degrees below average for late November.

The temperature for the Macy’s Thanksgiving Day Parade in New York City is expected to be in the low-mid 20s. Northwest winds from 15 to 20 mph will make it feel even colder, sending wind chills plummeting into the single digits.

A low temperature of 20 degrees Thursday morning would also be near the record-coldest Thanksgiving low at New York City’s Central Park.

Elsewhere, low temperatures Thursday and Friday mornings will be in the single digits and lower teens across the interior Northeast. Closer to the coast, it will be in the teens or lower 20s.

Wind chills Thanksgiving morning will be in the teens, perhaps 20s below zero in northern New England and the Adirondacks of upstate New York. Subzero wind chills are likely in parts of southern New England, western and central New York and northern Pennsylvania, including Boston, Hartford, Providence, Albany and Syracuse. 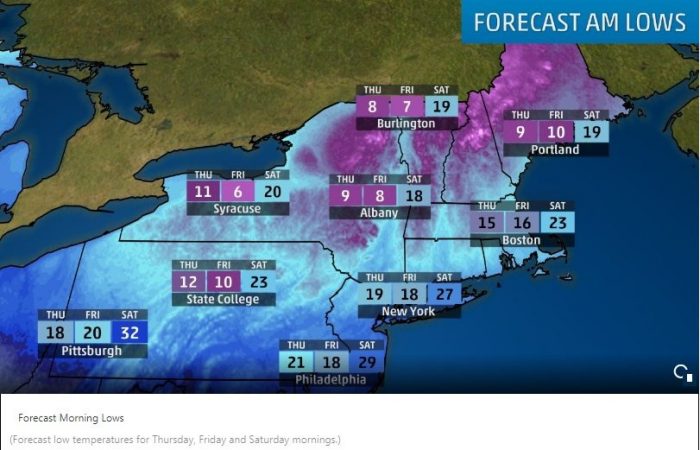 Daily record lows for Nov. 22 (Thursday) or Nov. 23 (Friday) will likely be broken from parts of New York and Pennsylvania into New England.

This includes Albany, New York, and Providence, Rhode Island, where the daily record-low temperature Thursday is 9 degrees and 16 degrees, respectively.

Although it will be cold, the air will also be dry, which means there won’t be any snowfall to worry about Thursday and Friday.

Fortunately, a warm-up is in store starting Saturday.