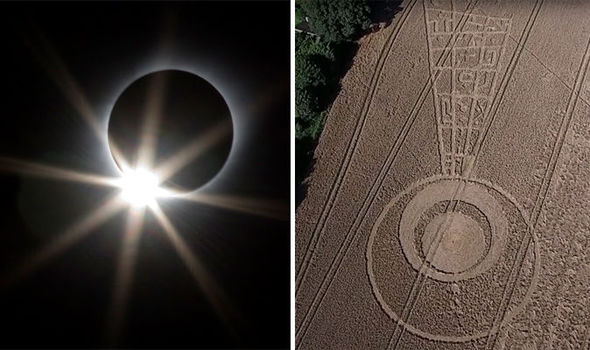 A CROP circle which seems to mimic the moon and the sun appeared just days before the solar eclipse, sending conspiracy theorists into a frenzy.

Just a short distance from the London Southend Airport, a strange crop circle appeared just days before the solar eclipse darkened the US.

UFO hunters believe that it is a message from aliens, who were attempting to make contact with Earth to coincide with the solar eclipse.

The crop circle shows a tripod containing what appears to be “very strange or ancient language” with a small circle on top of a larger circle – which some have interpreted as being the moon in front of the sun.

A video of the crop circle was uploaded to popular conspiracy theory YouTube channel SecureTeam10, of which the narrator says: “Some people have claimed to have decoded part of the message and discovered that some of the characters or symbols look very similar to ancient Latin or Hebrew.

“Is it trying to tell us something about the eclipse and does that fact that it is pointing directly to the airport across the way have something to do with this secret meaning.”

For the sceptics, the narrator adds: “Just because something can be mimicked by humans does not mean that the actual phenomenon is not very real, and in this case it could not be more real.”

However, viewers were not so convinced that the crop circles are a result of extra-terrestrial activity.

One person commented: “It’s funny because you have very little evidence that this was made by aliens and not by humans.”

Another added: “Crop circles are made by humans. Show me one in an otherwise undisturbed field, a field with no tracks that intersect the design, and I’ll change my opinion.”