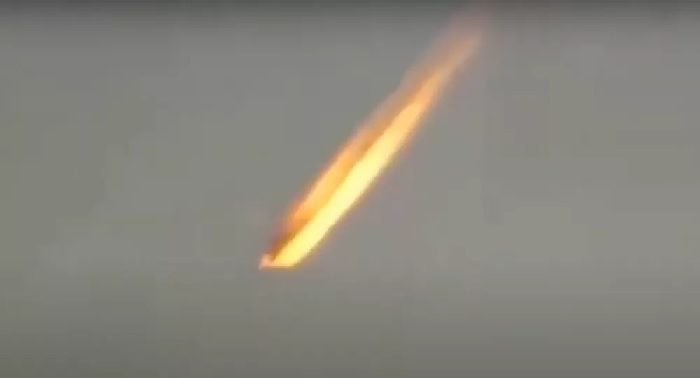 by Andrei Dergalin
via sputniknews:

An alternative explanation offered by at least one social media user, however, suggested that the object was actually a plane illuminated by the sun “from below”.

A peculiar-looking flaming object that streaked across the sky above West Virginia on 27 December has apparently left a number of social media users scratching their head and wondering about its origin.

But while netizens merely pondered on the sight they’ve witnessed or simply pegged it as a meteorite, prolific blogger and UFO hunter extraordinaire Scott C Waring suggested that it might’ve been a UFO.

Anyone in West Virginia know what is going on?pic.twitter.com/a13qt9jMp6

Insisting that “no impact from a meteor was recorded, found or reported” at that time, Waring claimed that the suspected alien craft was actually “limping back to the closest alien base with an extremely damaged ship”.

“The alien base is most likely under a tall mountain in West Virginia. How can something so big not hit when falling,” he asked. “The impossible… becomes possible right in front of our eyes. So… it landed safely, but barely made it in one piece to the alien base.

At least one netizen, however, suggested that the object in question was merely an airplane “flying at 30,000′ so the sun is illuminating it & the contrail from below”.

at sunset which is when this was taken the sun is just below the horizon, the plane is flying at 30,000' so the sun it illuminating it & the contrail from below. This time of year it's common we see them often looking west in the evening with the low sun angle & early sunset