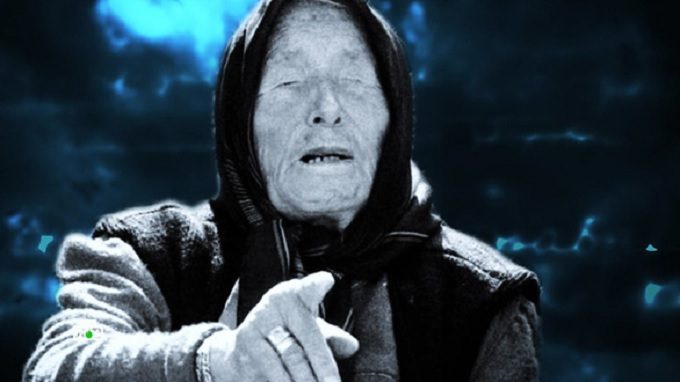 “The psychic reportedly predicted the Covid outbreak ‘years ago’ when she warned: ‘The corona will be all over us.'”

by Lizzie May
via The Daily Mail

Psychic Baba Vanga, who died 25 years ago aged 84, predicted that Russia was to ‘dominate the world’ in an interview with writer Valentin Sidorov in 1979

A blind psychic who correctly predicted the Russian invasion of Ukraine as well as the 9/11 attacks once claimed that president Vladimir Putin is to become ‘Lord of the World’.

Known as the Nostradamus of the Balkans, Baba Vanga, who died 25 years ago in 1996 aged 84, predicted in a 1979 interview that Russia was to dominate the world.

She also made a frightening prediction about World War Three and the potential use of nuclear weapons.

During the interview with writer Valentin Sidorov, she said Putin’s ‘glory’ will remain ‘untouched’.

‘Too much is brought in a victim. Nobody can stop Russia,’ BirminghamLive reported.

‘All will thaw, as if ice, only one remain untouched – Vladimir’s glory, glory of Russia.

‘All will be removed by her from the way and not only will be kept, but also becomes the lord of the world.’

Vanga is believed to have a knack for predicting major events across the globe, namely the 9/11 terrorist attacks in New York.

It is claimed that during her 50-year career, she also predicted the Coronavirus pandemic, Chernobyl disaster in Ukraine in 1986 and the death of Princess Diana in 1997.

The psychic reportedly predicted the Covid outbreak ‘years ago’ when she warned: ‘The corona will be all over us.’

She gained notoriety after supposedly predicting the Kursk submarine disaster in 2000.

In 1989, she reportedly said of the 9/11 attacks on the World Trade Centre: ‘Horror, horror! The American brethren will fall after being attacked by the steel birds.

‘The wolves will be howling in a bush, and innocent blood will be gushing.’

Vanga’s devoted followers say 85 per cent of her predictions are accurate, but according to experts, who have researched her prophecies, say only 68 per cent are.

One of the prophecies which didn’t come true was that the 45th president of the United States was to be ‘faced with a crisis’ that would ‘bring the country down’ – but America is still standing despite some challenges faced during Trump’s time in office.

She also insists that aliens will ‘not come in peace’, insisting that the extraterrestrials will arrive in asteroids’: ‘Alien ships will attack earth and they will bomb cities and take people captive’.

Vanga grew up on a farm, in what is now Macedonia, and became blind after being dragged into a tornado when she was young, with believers saying this freak accident was what gave her second sight.

Lizzie May
The Daily Mail