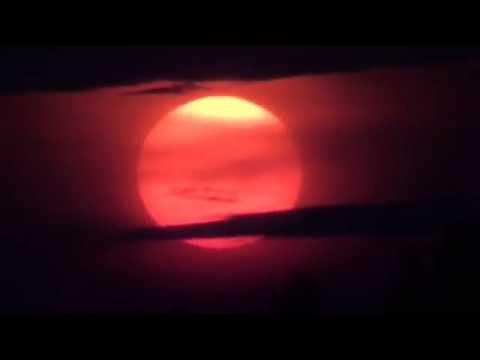 BLOOD MOON: Is Doomsday Planet Nibiru Coming After ‘Finally Being Captured On Camera’?

ITS arrival will signal cataclysmic events for Earth, according to doomsday predictors who claim planet Nibiru IS coming and has been photographed emerging behind our Moon.

Nibiru, or Planet X, is an alleged huge planet with a vast orbit, that conspiracy theorists claim will one day pass so close to Earth that its gravitational pull could break havoc on our planet, triggering earthquakes and other catastrophic events.

And now conspiracy theorists have somehow tied it in with the infamous blood moon events of a year ago that appears to be happening again.

Now, a YouTube channel claims an image of Nibiru has been captured on camera for the first time over Pensylvania in the USA.

And what’s more it claims the mysterious planet is what causes are moon to turn blood red.

Blood moons are actually caused by the positioning of the sun and moon when solar rays cast a red reflection over the full lunar surface.

Last year blood moons set the internet on fire because there was a rare tetrad of them which began on April 15 2014, followed by another red-coloured lunar eclipse the following October, a third on April 4 2015, and a final one last September.

The incredible alignment of blood moons has only happened a handful of times in the last 2,000 years.

As a result, it was claimed the final one last September would signal events that would lead to the end of the world.

But the Nibiru/Planet X channel has now tried to tie together the two myths and even claims it is the shadow of Nibiru causing the blood moons.

In the channel’s new video, the narrator says: “We are here to discuss the blood red moons we have been seeing back in June, July and now in August.

“There were supposed to be two blood moons, this year, one on March 23, and another is due on September 16.”

However, the channel claims there was an unexpected blood moon event on August 19.

He continued: “This is supposed to be a rare event, however, in 2016, we have had two and another is not supposed to arrive until mid September.

“The video you are about to watch is going to change everything you have been taught and everything that you believe in.

“This will show you the real reason why the moon has been turning a blood red… it is because planet Nibiru was next to it and casting its red shadow upon the moon.”

Images like this of the moon – with an apparent twin – have been captured before and it is easily explainable as a lens flare, which causes a reflection of the moon to display on the image.

However, the narrator of the video is convinced this time it is different.

He added: “Now I know a lot of you naysayers will say this is a lens flare, but save your comments for another time as this is a stationary object next to the moon there is absolutely no doubt about it.

“There is absolutely no doubt there is a planet in our solar system that does not belong there, something we have not seen in our lifetime or this century or the last few centuries of the past.”

The conspiracy theorist continued to speculate that world governments knew Nibiru was coming, but would refuse to tell us right up to the end.

“This was the third blood-red moon in 90 days seen in our skies.

“I guess the time is now to prepare. Whatever mid-September holds in about 30 days, if we see another blood red moon, I would have to say Nibiru is upon us, and now is the time to start preparing.

“I don’t know how much time we have.”

Fortunately for us, since the rise of the internet and YouTube, doommongers have been predicting the arrival of Nibiru now for many years.

And, so far, many earlier dates have been foretold and come and gone without any sign of the mysterious planet and the so-called doom it is supposed to bring with it.