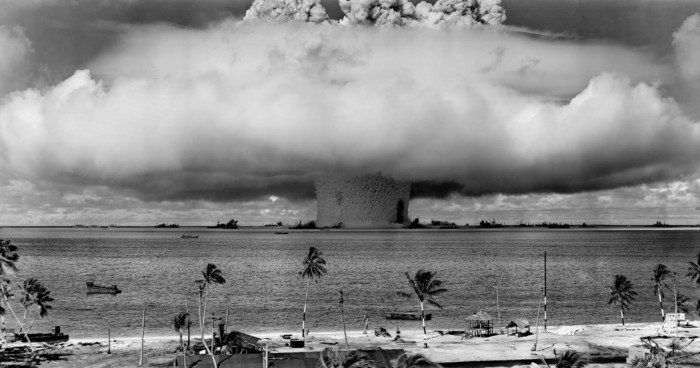 The Cold War is done and dusted (well, kind of) but its legacy still lives on, even in the bodies of creatures living in the world’s deepest underwater trench.

At the bottom of the West Pacific, in its darkest depths – the deepest point on Earth, in fact, the Mariana Trench – scientists have discovered the presence of unstable carbon isotopes in the bodies of shrimp-like beasties. By tracing the unique “fingerprint” of the isotopes, they were able to trace it back to the nasty leftovers of nuclear warheads detonated during the Cold War.

Reporting in the journal Geophysical Research Letters, scientists led by the Chinese Academy of Sciences documented how atmosphere explosions from nuclear warheads above the Pacific ended up in the guts of tiny crustaceans at depths of up to 11,000 meters (36,000 feet).

The team of scientists started by collecting small crustaceans, known as amphipods, from the Mariana Trench, Mussau Trench, and New Britain Trench in the spring of 2017. Analysis of their muscle tissue and gut contents found strangely elevated levels of the unstable carbon isotope carbon-14 (14C), a sure sign of thermonuclear denotations.

The world’s small handful of nuclear power nations – mainly the US and the former USSR – have conducted more than 2,000 nuclear test explosions since 1945, nearly 400 of which were denotated in the atmosphere between 1945 to 1963. As a result of this wreckless atomic activity, the amount of 14C in the atmosphere doubled during the 1950s and 1960s alone.

It appears that this 14C “drifted” its way down to the ocean’s surface water below. Here, it was eaten by surface-dwelling creatures, where it made its way deep into the food chain of Pacific marine life. As scavengers, amphipods will also happily eat the rotting flesh of marine creatures that have floated down to the seabed after they die, thereby serving as a super-fast route through the atmospheric 14C to end up in the belly of deep-sea shrimps.

Interestingly, the levels of 14C also suggested that these deep sea inhabitants have a relatively long lifespan of over 10 years, much higher than their shallow-water cousins.

“This ‘bomb 14C’ mixed quickly into the surface ocean and terrestrial carbon pools, enabling 14C to be traced within the carbon cycle on a short time scale, from years to decades,” the study authors write.

“The penetration of bomb 14C into the deepest fauna has not been reported until now.”

Radioactivity isn’t the only relic of human activity that can be found in these trenches. Scientists have found plastic bags on the floor of the Mariana Trench. Even more worrying, a recent study published earlier this year discovered the presence of microplastics in animals living in the Mariana Trench. In fact, nearly 75 percent of the shrimp tested here contained at least one plastic microparticle, showing that human influence has spread to even the most remote places on Earth.

Now just imagine what’s happening to sea life because of Fukushima, and what those who eat sea animals could be potentially ingesting.